Today, we rented a car and took off into the Québec countryside.  Yes, this was part of our homework.  We have been learning directions so all navigation was carried out in French.  Unfortunately, we had not learned the word for u-turn which we would have found rather handy!

We headed east from Montréal and found ourselves in the Eastern Townships, a little pocket of Québec tucked up against the US border.  Beautiful countryside filled with vineyards, cycle paths, cosy accommodations and unique gourmet experiences (and precious memories to bring home if you believe the website!).  It was certainly very pretty.  Although we are right at the end of 'sugar season', we did see many maple trees tapped for syrup.  Gone are the days of the bucket at each individual tree - maple forests now sport poly tube that runs from tree to tree and along a central collection tube.  Not quite as romantic but would save the slog from tree to tree.

We also discovered a covered bridge!  Prior to the industrial age, most structures were made of wood and/or stone.  Wooden bridges built where the rain and snowfall was extensive tended to rot quickly if left uncovered.  The roof on a bridge meant the bridge was snow-free and therefore useable during the winter, as well.  This particular one, le pont Perreault, had a latticework frame of 2"x 8" beams attached to 8"x 8" beams inside.  Québec still boasts 82 covered bridges, in varying states of repair.  We explored le Pont Perrault that has undergone a full renovation and is absolutely stunning.

Further on down the road, we have the option of heading to Melbourne or Richmond.  Is our navigation that bad?!

... and then we headed to Asbestos.  The town of Asbestos was named for the wonderful silicate material that is mined there.  Asbestos had the world's largest asbestos mine up until it was closed down in 2011.  It surprised me that asbestos was still being mined only a few years ago so I did a little research.

Asbestos is not fully banned in Canada although it is highly regulated.  What really surprised me is that it is not banned in the US and is still commonly used products as clothing, pipeline wraps, vinyl floor tiles, millboards, cement pipes, disk brake pads, gaskets and roof coatings.  Blue asbestos was banned in Australia in 1967, the use of asbestos materials was banned from building products in 1989 but (and again I was surprised!) it was not until 2003 that its import, use and recycling was fully banned.  India, Indonesia, China, Russia and Brazil continue wide spread use of asbestos, including in building materials.


Despite it still in fairly common use, if I sat on the Asbestos town council, I would be pondering a name change!

Lunch was the Quèbec specialty poutine - and from the this region.  Depending on which source you credit, it was 'invented' in Victoriaville, Drummondville or Warwick!  For those unacquainted with the delicacy, poutine consists of french fries, cheese curds and gravy.

Rubbing our bellies and questioning our wisdom in dining choices, we headed north-west to the Saint Lawrence and ambled along its banks back to Montréal.

Time is flying by and week three of our course is done.  Our French has improved in leaps and bounds from where it was but we are nowhere near fluent - stilted conversational would be more apt - and about where we hoped we would be.  We continue to be impressed by the quality of instruction and surprised at how tired we are!  Three and a half hours of full engagement every morning is not what we have been used to for a while.

Montréal's weather is much prettier but not yet tropical.  We caught up with Michelle again this week.  She introduced us to yet another fun eatery before we spent the afternoon wandering around the Redpath Museum.  A beautiful building where you could imaging Indianan Jones and his father huddled over priceless relics.  The museum is owned by McGill University and is filled with natural history exibits from mummies, to shells to stuffed polar bears. 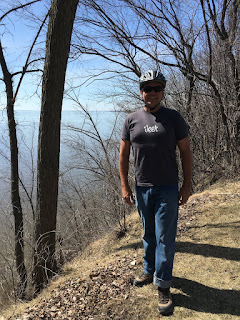 We are very much enjoying our French classes.  Our teacher, Thomas, is excellent, very funny and very effective.  He is French so is able to teach us the nuances between le québécoise and le français.  He has also been most effective at teaching us to swear in both too! We are the only Canadians in the class.  Our fellow students are made up of immigrants learning French (from Jordan, Australia, Brazil,  England) and those who have come to Montréal specifically to learn French (Brazil, USA, Italy, UK and NZ). Over half the class are not native English speakers which is a great help with accents and pronunciation.  We are both confident we will be able to speak and understand, read and write a sentence or two by the time we are finished.


Outside classes, we have plenty of homework and lots of vocabulary to learn. Our apartment is looking very festive with post-it notes stuck all around in an effort to facilitate our learning. We are lacking someone to correct our pronunciation so we will end up with weird anglo-Google Translate accents! 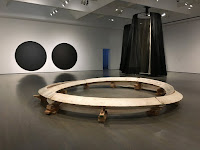 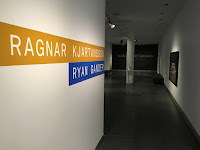 The weather has been quite bitter with a freezing wind whipping through and sub-zero temperatures.  Our desire to be out and about has therefore been dampened so we are spending a lot of time in the gym.  Today, we went to the Musée d'art contemporain de Montréal.  As with any contemporary art, some was fabulous and some, we failed to appreciate.

I particularly liked two video installations by Ragnar Kjartansson.  One called A Lot of Sorrow, was the performance of the song Sorrow by The National played over and over for six hours.  Whilst we did not watch the whole six hours, it was a great song and interesting to see the variations in each repetition. The second installation was The Visitors where a group of musicians played a song in a large mansion.  Each musician was in a different room (including one in the bath) and each was displayed on a different screen.  You were unable to see all the screens at once so you moved around. Très cool!

An uneventful half-day of travel has brought us here to Le Plateau, an upscale neighborhood in Montréal.  The whole purpose of this trip is to improve on our baseline spoken french.  We have signed up for an intensive, three-and-a-half-hour-a-day immersion class here in la belle provence.

After arriving at the airport, we bought a monthly transit pass and made our way (via the airport bus) to our rented apartment on Papineau Avenue.  It is in a tired, 1960's era building on the 24th floor, with a stunning view east towards the Olympic Stadium and the St. Lawrence Seaway.  Patrick, our host, met us at the building and gave us a walk-through and the door keys.  We don't expect to see him again unless something goes terribly wrong.  There is a full kitchen, dishwasher, clothes washer/dryer.  We feel as though we've relocated here instead of being through-travelers.  There is a large park across the street; local grocer, many depanneurs, an ATM and two metro stops nearby.  We've realized that this four weeks is going to be the longest we've slept in one place since September of last year.


In two days we start the language classes.  Having french all around us will help us (hopefully) to soak in the new pronouns and verb conjugations, forcing us to adapt it into regular use. 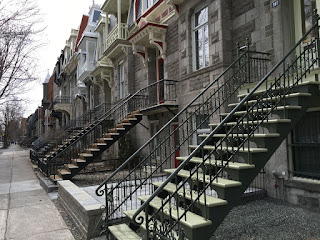 After we had unpacked, a quick walk to the local market for breakfast supplies revealed row upon row of three-story walkups.  Sean loves the look of the iron staircases curving up to the first-above-ground-level floor.  There is a grittiness about this city famed for its crumbling concrete and deteriorating infrastructure.  Potholes are obvious.  Patches upon patches dot the sidewalk. A slight residue of litter tucked into the edges and corners of buildings gives the whole place a mature, non-nonchalant feel.  The fact that the skies are grey right now and the warmish spring days are about to give way to a colder week will add to the bleak ambiance of our surroundings.  This doesn't make Montreal a bad place to be - it just makes you want to be able break through its cold facade and discover the warm, jovial Quebecois party that *must* be happening behind doors that you haven't learned to open yet.

Ok, Montréal, we are here.  Show us what you've got.

By the way, this is our hundreth blog post.  We're not quite a year into our adventures.  Wonder what is next?
Posted by Sean at 6:54 PM No comments: