The 2016 Royal Malaysia Selangor International Race is now finished.  Popeye finished a very respectable 2nd in her division and the owner was very pleased.  We only had one casualty (Richard dislocated his shoulder but is on the mend now) but the boat, its sails, rigging and equipment are all intact and accounted for.


It was good to see the crew from last year.  There were a few things that needed to be collected (provisions, anchor chain, beer, etc.) before we started the first passage race, but we had arrived early enough to do all this.


The teksis (taxis) in Malaysia are loosely regulated (like everything else) and I got into one to do my errands that I thought was going to be the end of me.  Red lights, other traffic and road furniture meant nothing to my jolly driver as he chuckled his way around Port Klang, with me white-knuckled beside him.  The only thing worse than his English was the maintenance of his vehicle ... no, wait.  The air conditioning was worse.  I fully understand the "mad dogs and Englishmen" quip now, too. 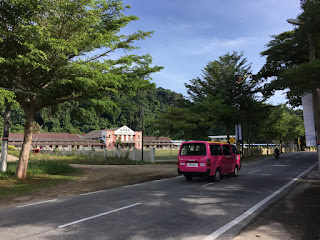 Bobbing around the bay in Pangkor, we planned our next port of call - the Royal Selangor Yacht Club.  With a 12 - 15 hour sail ahead of us, we decided to depart at midnight and take advantage of the supermoon.


With a name like Royal Selangor Yacht Club (located in Port Klang), you'd expect something quite grand but according to the sailing website Noonsite,


'Port Klang sits in a soup of sludge, sewage, debris and other detritus, stirred by fierce currents and the wash of a myriad of tramp steamers.  It lies at the antithesis of the crystalline waters which await just around the corner of Peninsula Malaysia, however its one redeeming feature is the oasis of the Royal Selangor Yacht Club.'

Just makes you want to head on down, doesn't it?

89 nm later, we made out way south down the channel into the infamous channel.  It was a bright and sunny day by the time we entered the north channel which assisted greatly as we tiptoed through ships, floating detritus, fishing boats and their nets, birds on 'stand-up paddleboards', through the port, up the river and into the yacht club.  Sean displayed great skill and composure as he backed Popeye into her berth against the fierce currents.


Also according to Noonsite, millions of Ringgit have been spent on cleaning up the river with barriers installed at strategic locations leading to a marked improvement to the condition of the water around the yacht club.  This is true, however swimming is still definitely not something we would consider!

We had a little excitement when one of the yachts (Pasaya, pictured above) tried to leave its berth and was caught in the current.  A neighbouring yacht (Fujin) had its navigation lights snapped off as Pasaya drifted into Fujin, then pivoted around her.  Happily, Popeye was left unscathed.

Phew - imagine getting her here without a scratch only to have her T-boned by an errant yacht in her berth.
Sitting, happily sipping on our beers on the deck and our friend decided to move his boat again.  Despite the belly full of beer, Sean and Lucky (one of the crew off Starlight) broke land speed records leaping from the bar to Popeye as our friend broke personal space boundaries.

Phew (Mark II) - the only boat damaged in any way was our friends!
Posted by Kate at 4:50 AM No comments:

On dead calm seas, we headed south to Penang.

The sky started to turn a little dark and soon we were enjoying 35kns and driving rain.  Once the wind died to below 20kns, we unfurled the heady, picked up a knot and bounced our way across the Bay of Bengal.

We could see the high rises of Penang for a couple of hours before we arrived.  Ships began popping out of the channel, cruise liners, cargo ships, tugs towing barges, as we tiptoed in through relatively shallow water and anchored off the Straits Quay Marina (SQM as it is known).  Sadly for us and our 2.85m draft, SQM is far too shallow and even anchoring in a depth of 5m means we are a good 300m from the entrance.

Penang is a very busy port, made busier by the construction of two islands just to the south of SQM.  Penang is in need of a new marina so they are creating a 700 acre island to house it! Barges full of fill line up and rush in at high tide to offload.  Our serenity disturbed by the background noise of construction equipment running 24 hours a day.


Last year, we had a stop in Penang as part of the Raja Muda yacht race.  We stayed at a northern part of the island and didn't stray too far from the hotel.  This visit, we decided to explore Georgetown, a UNESCO World Heritage Site at the southern end of the island and we were blown away.  The colours and sounds ... the street vendors ... the street art ... it kept us entertained all day and we just saw a small bit of what there was. 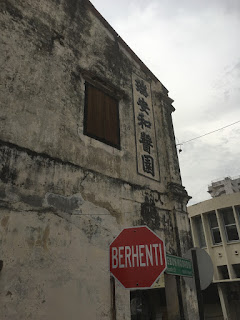 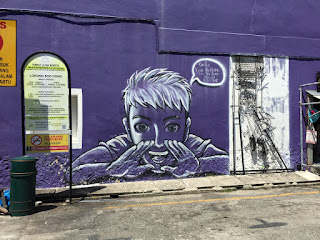 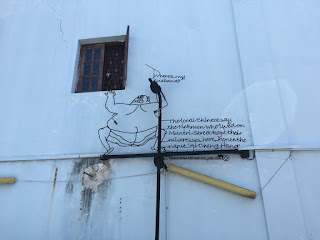 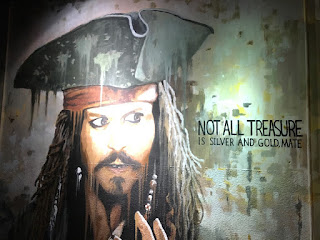