Getting back to no place of your own was a bit disorienting. We are currently living in Karen and Terence's basement guest room, and are adapting to being homeless at home.  Searching across four different locations for the clothes and possessions we needed for the next two weeks takes much of our time.  The rest of our effort and daylight hours are spent on sorting out and filing taxes; dealing with six months of mail; checking in with the tenants; finding what we needed for our upcoming European four-week cycling trip; acquiring a bike for Kate that will carry what she needs and has the gearing to climb Swiss mountain passes; driving to Sunshine Village to ski with neighbors who moved away from us, then driving to Fernie the next weekend to ski with neighbors we moved away from!  We have now caught up with most of the relatives and friends that have been asking after us and are vaguely settled back in Canada.  We have a primary pack done for Montreal, which is timely as we leave in 36 hours!

Life is currently planned out until mid-July, after which the strategy becomes "... and now we hang around Calgary until mid-October." Agreements have been made to return to Thailand to sail after that point, delivering Craig's boat to the race and serving as crew for the race. The crystal ball becomes cloudy after that, but I'm sure we'll salvage some fun out of the uncertainty.

As our time in Australia draws to a close, we thought we would post our plans for the rest of the year. If we happen to be in your neighbourhood, let's catch up!!

Our final few days in Australia were spent in beautiful Sydney.  We stayed a couple of days in the city that allowed us to explore art galleries and Sydney's newest park - Barangaroo Point Reserve.  An evening at Middle Harbour Yacht Club racing on No Friends was a reunion with the Raja Muda crew. A grand time was had.

Of course, no trip to Sydney is complete without a few days on Dee Why Beach with Miss Amanda.   Dee Why's golden sands and sparkling blue surf was appreciated with early morning swims and beach side lunches. 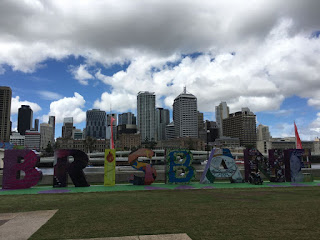 We have landed on a family that we originally met in Canada and that have returned to their home town … and are now growing back into their regular life. The Phelans entered Kate’s world when Tim (the patriarch) worked with Kate around 2007. Tim was to be based in Fort McMurray and Kate was flying in and out of the work site in the deep north of Alberta on a regular basis. When Tim relocated his family from Brisbane, they set up a friendly Fort Mc home-away-from-home and would often invite Kate, a poor-little-displaced-and-familyless-Aussie, over for a properly cooked meal when she was up north. When Kate met Sean and set up her own friendly little home in Calgary, they would have Tim (and often the family) over for dinner … and the occasional two week stretch when the kids were on summer holidays. The Phelans were eventually repatriated to Australia and returned to their bigger, nicer home in Brisbane’s suburb of Ashgrove.

Even though Kate and Tim no longer worked together, we still stay in touch and were able to spend five days with them on this trip.  There was much to talk about and catch up on. The kids are now involved in their own pursuits, from water polo and swim racing to viola lessons. The unique personalities we saw as seedlings in Canada have all blossomed into full-fledged, interesting and opinion-holding people. We were lucky enough to just be flies on the wall (and sometimes passengers in the child-transport) while life at the Phelan Household continued at its frenetic pace. We loved being around for spirited discussions over dinner, Kate Phelan’s birthday, a water polo tournament, Sean’s very first pro rugby match (which didn’t end well for the Reds), the start of the planning process for the next family vacation and the general hubbub that exists with a busy family.

While the kids were at school, we had time to relax, repack for the upcoming trip back to Canada or even wander along the river pathways near Southbank and the central business district. Our time was very relaxing and reminiscent of summer afternoons on the front porch in Calgary, which we still remember fondly.

Here we are, back at Big Sister's place in Palmwoods.  Tom has had his epic 21st birthday party.
Much alcohol was consumed.
A pig and a lamb were roasted.
A band played great backgound music, then got everyone going with dance tunes even us oldies enjoyed.
Old people were bemused.
Young people did not get out of hand.
Speeches were made.
Thank-you's were offered.
No one was seriously injured.  All was good.

The partygoers (all ninety of them, by our estimates) all emerged well after mid morning and did an admirable job of tidying up the paddock were the party was held.  Tents were disassembled, thousands of empty beer cans were gathered, garbage disposed of and rental tables and chairs stacked and made ready for Monday pickup.  The friends and birthday boy headed back to their jobs, Emily headed back to school and the rellies hooked up their caravans and have made themselves scarce.  Whoosh.  It got quiet here in a hurry.

With Graeme out of town and Wendy back at work, we've had to amuse ourselves.  Our domestic longings have started to show.  We've started doing chores around the house while Wendy is at work.  We've gone for a few hikes (up to Mt Tibrogargan and Montville) and have been out for a few days at the beach at Mooloolaba, which is almost as much fun to say as it is to be at.  A recent cyclone has stirred up the surf making for some dumpy waves on the beach, but we still don't mind being down to walk along the sand and ponder life.

Noosa also makes for a great escape, as it is protected from the breaking waves. Noosa is famous as a retirement spot and a place for those who want to be away from the hustle and bustle of a big city (Brisbane) but not too far from civilization.  Kate and I looked at all the condos there and tried to imagine ourselves as little, old retirees with a place facing the beach and our walkers parked side-by-side on the footpath leading to the boardwalk.  It's a nice thought.  The jury is still out on whether that will be what the future looks like.  Until then, we keep traveling.