My grandparents travelled extensively during my childhood. They were away for eight in thirteen years after my grandfather's retirement in the early 1970s. I do believe my love of travel stems from their postcards and letters from places as exotic as Lapland, Gibraltar and Banff. We received the most fabulous gifts on their return - the Swiss music boxes, the Spanish dancing dolls, the Limoges china plates, Wedgewood Blue boxes, the American dresses... I recall the awe with which each was received and how distant and exotic were the places from which they came.

Today, I saw the awe of the 10-y-o me in the face of my French god-daughter when I gave her the Swiss music box. Here I am in one of those places on the postcards, passing down a treasure and watching the absolute delight with which it was received. It was a very precious moment.

Grandma and Grandpa, thanks for all the magical presents you brought home from your travels to amaze my young mind but most particularly, thanks for the gift of wanderlust and the awe it continues to bring. 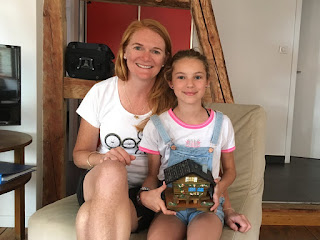 Guinness is an acquired taste ... which we have acquired.

It only took one day for the jet lag to pass.  The day was alternately spent staring glassy-eyed at the sights from the top floor of the Hop-On, Hop-Off double decker tour bus, and getting whiplash as our heavy heads sleepily pitched forward and back on the double-decker.

The bus ride and four-kilometre march from the bed and breakfast to the closest stop on the Hop-On, Hop-Off loop gave us a good geographical orientation of Dublin.  The city is centred around the River Liffey and we were staying at a bed and breakfast near Phoenix Park, 4 km inland.

The city is quite old by western European standards, being recognized as a CITY in 888 A.D. and growing in rank until around the early 1500's, when it was then deemed to be second in the British Isles in importance and size to London.

In the two days we spent in Dublin, we had time to:


Although two days is a very short time to spend at such a historical and interesting city, we didn't mind hopping into the rental car and moving on the next day.  With Dublin having the main airport in the country, we suspect that we will be using it as an entry-and-exit point again sometime.

On our way to our bed and breakfast yesterday, we stopped at the Newgrange prehistoric monument.  Being built by primitives who didn't have conveniences such as machines like ropes, pulleys or even the wheel, we were impressed by these tombs and places of worship - in both their size and durability of construction.  They pre-date the Pyramids of Egypt and the Stonehenge.

The tours of the sites were thoughtful, informative and not overly long.  We had time to be impressed and still made it to the next town before dinner.

We are now in Galway to see this west coast (of Europe as well as of Ireland).  With only a day (so far) to stroll around, we have already located and visited the City of Galway museum and learned some of the history of this 7,000 year old settlement.  Taken over by the Normans (English) in the late 1200's, it shortly afterwards became a walled city.  Tolls were collected for moving goods up the river and streets were paved, order was kept and schools were created.  Fishing was the main business for hundreds of years and it was a prosperous port, being the closest launching point for the Americas.  As a result, the port has been in use for many hundreds of years.

The city is lovely.  It is a college town as well as a seaside resort for the surrounding counties, so it has a very young and energetic vibe.  This and last evening were spent in the pub, confirming our newfound taste for Guinness and soaking in the lilt-accented culture.  Kate and I had a few winsome smiles at overheard snippets of youthful naiveté.  It is not hard to see how the wit of Oscar Wilde and Jonathan Swift were nurtured in the dark-stained oak of the Irish pubs.  Good thing the two of us have become so wise.


While here, we are inquiring after baptismal records for my maternal grandmother as part of my quest to claim Irish ancestry and have my name added to the list of Irish Foreign Births.  The parish in Oranmore (in the county of Galway) has a graveyard that contains the aunt I met when I was a wee little boy in Edmonton.  The parish office has record of three of my great aunts and uncle's baptism but, alas, not the record of Granny Sarah.  We have a few more places to check and people to inquire with before we leave the Green Isle.


Tomorrow, we drive to the cliffs of Moher.
Posted by Sean at 3:59 PM 1 comment:

Shortly after I have started my 54th year, another adventure begins.  First, nine days touring southern Ireland (via a layover in Montreal airport) by car.  Following that, over two months in the village of Obernai, which is located in the province of Alsace in France.  Kate and I will be using Obernai as a home base for trips to Bischoffsheim (to visit our friend, Florence and her family), to Norway (where Kate, her sisters and mum will be celebrating Nancy's 80th birthday), the northeastern French countryside and the paved slopes of the Vosges Mountains.

Our Irish odyssey will include exploring Dublin, visiting some of the sights and locations made famous in James Joyce's Ulysses; a drive to Oranmore in County Galway to track down birth and baptism records for my paternal grandmother; a meander along the western coast to see the sea; a trip to Cork to visit friends and see how the locals live.  There will be no Blarney Stone kissing, leprechauns or shamrocks involved in this expedition. I'm expecting to fall in love with the greenness of the place, even though it is likely to drizzle the whole time we are there.