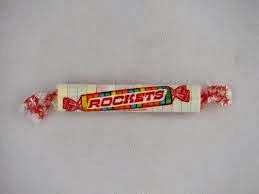 A few days prior to Hallowe'en this year, I happened upon a bag of Rockets and was bowled over with a wave of nostalgia.  I bought them under the guise of offering them up to the tikes that came begging for sweets this year. I had to fight to keep my Aussie bride from handing
out my treasured treat, as I think she was protecting her purchase of Oh Henry's and M and M's she had bought.  When the pumpkin candles were blown out, we both seemed to have an equal share of our own candies.
Posted by Sean at 10:18 PM