So this was all rather cool!  Deepest, darkest Borneo...

We tiptoed into Kumai on Easter Sunday after a 300nm crossing from Belitung and anchored snugly in the river between the barges and tankers.  The Kumai skyline looked very industrial with many large, grey buildings.  What could they be? Wheat silos, apartment blocks??
They turned out to be bird houses and home to the black-nested and white-nested swiflets that make the nests used in birds' nest soup!  It is a big business in Kumai catering to the Chinese market who believe eating the nests has all sorts of health benefits from increased libido to cough prevention!

The air was filled with the tweeting of birds (which we later found out to be recordings to attract the birds to the houses!) and the adhan or call to prayer. This was the backing soundtrack to our time in Kumai.

As we anchored, Liesa from CV Satria Majid Tours (www.borneowildorangutan.com) met us in her speed boat. By the time she left, we had arranged a 3 day/2 night tour in the National Park, diesel, laundry and they provided a shuttle service to and from the boat at call to save us inflating the dingy. And she left with Heather and Charlie!  They decided to take the opportunity to spend a few days ashore but arranged to spend the first day of our klotok tour with us and then be picked up by speed boat and sped, in the dark, on the crocodile infested river, back to Kumai.

We joined Heather and Charlie in town for the afternoon then were dropped back to Popeye to get things organized for our three days up the river.  Part of the service provided was to have a boat boy sleep on the yacht to ensure she was safe and secure allowing us to fully relax while away.

We were picked up next morning by the klotok with Heather, Charlie, our tour guide, captain, boat boy and cook.  Yep, we had four staff to cater to our every whim for the next three days. We headed down the Kumai River then into the smaller Seikonyer River which is the border of the Tanjung Puting National Park. A klotok is a two-storied river boat.  The top level is for the guests with beds, eating area and chairs on the bow from which to enjoy the view.  There is a bathroom at the back and kitchen, crew quarters and wheel house below.


Traveling along the malarial, crocodile-infested river was quite amazing.  I did see a crocodile so can attest to it being crocodile-infested.  No swimming here!  We watched proboscis monkeys in the trees, eating the reeds on the edge of the river and even saw one brave the crocodiles and swim across!  Macaques, gibbons, fireflies, snakes, scorpions, tree frogs. Bird life was everywhere from the brightly coloured kingfishers and broadbills, the crazy-looking hornbills and coucals who always seemed to be drying their wings. 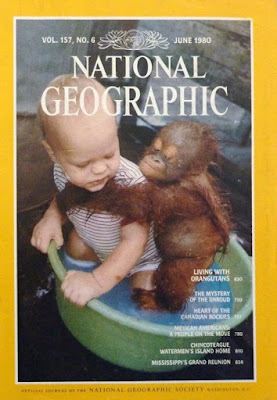 As kids, we used to love the National Geographic and would pour over the amazing photographs.  I clearly remember the photo of the little boy in the bath with the orangutan.  And here we were, heading off to Camp Leakey where the photo was taken! Camp Leakey is the research station founded by Dr Birute Galdikas to study orangutans back in the 1970s.  She was mentored by Dr Leakey, thus the name, who also mentored Jane Goodall and Dian Fossey.  As well as research, they fostered orphaned and rescued orangutans and released them back into the wild. To ensure they had enough to eat, and to take the pressure of the wild ones, they set up feeding stations.

Orangutan is from the Indonesian/Malay language. Orang means person and Hutan means forest.  People of the Forest - may both they and the forests survive.

And in the midst of it all, Heather turned 50!  What an adventure to mark a milestone birthday.