According to worldwide standard time, there are six time zones in Canada - Pacific, Mountain, Central, Eastern, Atlantic and Newfoundland.  We live on the western edge of Mountain Time and we expected to lose an hour as we crossed into Manitoba (Central) then again as we approached Thunder Bay (Eastern) in Ontario.  Things appeared so orderly and simple.

So were we - and so was the GPS in our car.  Our phones, watches and car clock were often out of sync.  And we could not look skyward to judge the sun's angle to approximate the time as there is a big issue with the time of sunrise and sunset due to the size of some time zones.  The Eastern Time Zone is huge.  It is 2,500km from Thunder Bay to Gaspé.  The sunrise and sunset in Thunder Bay is an hour and three-quarters later than in Gaspé. So the sun rises at 6:45am in Gaspé but not until 8:20am in Thunder Bay.  No wonder we never knew what time is was!

And it was a Canadian who gave us worldwide standard time - Sir Stanford Fleming! Now Sir Stan was a bit of a legend. Not only did he come up with the idea of time zones linked to the Prime Meridian, he designed Canada's first stamp, proposed the use of 24-hour time and engineered much of the Canadian Pacific Railway - and that was only in the first half of his life.  Quite the overachiever!

So let's talk meridians.  They are very important in Western Canada.  When carving up the west to provide land grants to settlers (and in the process, breach the treaties and generally screw over the First Nations and Métis), The Dominion Land Survey created a series of meridians.  These are lines of longitude running between latitudes of 49° N and 60° N. The first meridian is at 97° 27' 28.4" W,  just to the west of Winnipeg and chosen because it was the extent of settlement at the time.  In creating the next six meridians, things became a little more orderly and the second meridian was established at 102°W.  Subsequent meridians are every 4° of longitude until the Seventh Meridian at 122°W.

The Fourth Meridian, which establishes the border between Saskatchewan and Alberta is the world's longest surveyed straight line!  A definite need of a plaque for that! 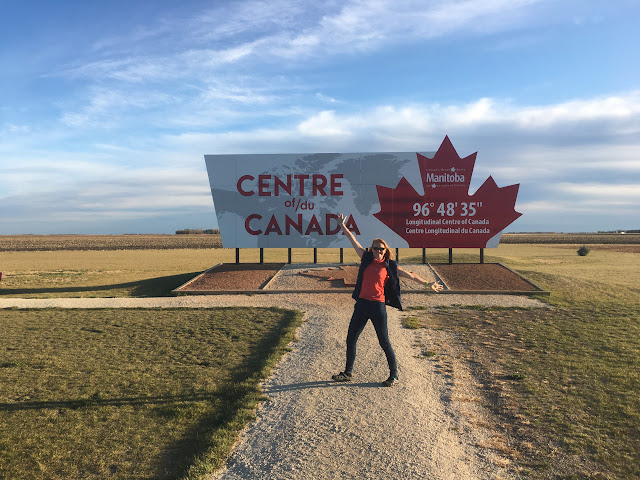