Ray and Adrienne's time with us came to a close just before New Years.  We dropped them off by dinghy to Ao Bang Tao, then rented a car to go and connect with our next guests, Cindy and Roger.  We met at a cheap-and-cheerful restaurant on Kata Beach for dinner and to plan our next ten days.  Their experience at back-country camping and ski trips gave them the foresight to create a meal plan so we could easily do the shopping on the next day.  We were very impressed - this was going to be a treat!  We left them to enjoy one more night in a bed on land.  The next morning we picked them up, spent the morning doing boat errands (including getting provisions), then took our yellow dinghy back to Popeye.  The evening was spent with them setting up in their cabin, then getting the safety/info briefing under a warm, pleasant evening sky. 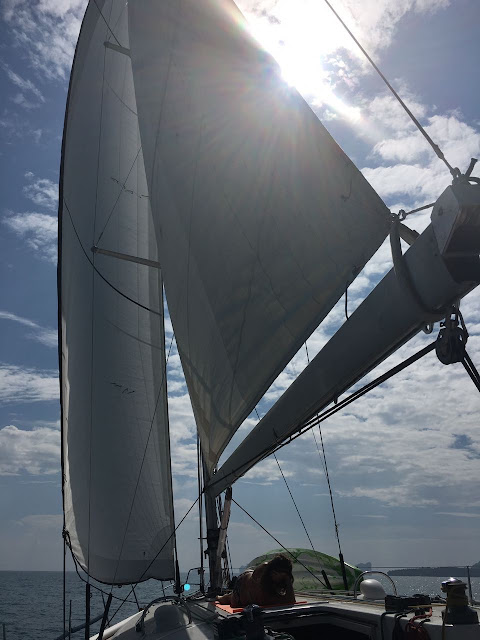 We started our journey the next morning.  The sails went up shortly after leaving Ao Bang Tao.  We decided to sail north up the coast to Khao Lak, where we could refuel before our jump to the Surins the next day.  We had a good run and made it right to the mouth of the Khlong Thung Maphrao (river) before starting the engine and gingerly made our way in on a rising tide to a spot across from the fuel dock.  As the charts showed that the approach to our access to diesel was too shallow to just pull Popeye up, we put jerry cans into the dinghy and zipped over to get diesel four cans at a time.  The night was spent across from a very commercial-looking dock, watching the speedboats we had seen at the Similan Islands days ago come back to return their day's passengers to the land.

The next day, the winds proved a bit too much for us, coming at us from a different angle than the swells.  Rather than scare our guests (and ourselves) in the gusts, we motored the last few hours in rolling chop.  When we did get to the Surins, we were happy to get on the lee side of the islands and into some calmer waters.  The first spot we put down anchor was occupied with a big motor boat that first warned us that the previous night 35 knot wind gusts had blown through the lagoon, then he complained that we had dropped anchor too close to him.  We took the hint and headed to a different bay.

After moving to the other side of Ko Surin and tiptoeing through some coral-peppered areas, we found a good anchorage and stayed there for three nights.  The snorkeling was very impressive (better than much of the scuba diving Sean and I had done) as the Surin Islands is a national park and renowned for it's coral and diverse sealife.  After trying several areas in several bays over the course of three days, we determined that the best sights to be seen were located ... 200 metres from the stern of Popeye!  We were anchored in eight metres of water, but found a coral head just outside of our anchor radius that held all sorts of wonders - clown fish, eels, angel fish ... more than our little diveshop fish guide could tell us about.  We did spend an afternoon ashore but found the real entertainment to be in 0 - 3 metres of water.


After our four nights in the Surins, we decided that we should show Cindy and Roger Donald Duck Bay in the Similans.  It was on the way back to Phuket, where they were flying home from, so we needed to pass that way.  The winds had come around to be right on our nose, so we had to motor all the way to Ko Similan.  We picked up a mooring ball just outside Donald Duck Bay and were very disappointed that a bloom of jellyfish had appeared around the boat and, we assumed, the whole island.  The next morning after a very bumpy night, we were able to move into the bay and find ... no jellyfish!  The current, or something, had moved them along and we were left with the amazing clarity we experienced on our last visit to this island. 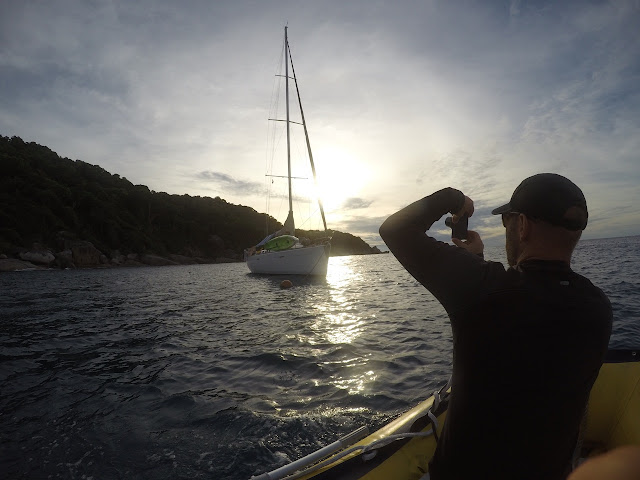 Yes, the tourists came.  Yes, it was busy and chaotic.  They did leave at the end of each day and we again had the beach and the bays pretty much to ourselves.  After two more nights at Ko Similan, we debated trying another snorkeling spot at Ko Miang - still within the Similans.  The weather had been getting overcast and windy and we had been without mobile/internet coverage.  The next morning showed no improvement in the weather so we motored down to Ko Miang only to find that a tropical storm was on its way.  Back to the mainland for us!
Posted by Kate at 7:25 AM