The Banff Centre of Arts and Creativity is an absolute gem and an amazing institution to have in our backyard.  From opera to the Banff Mountain Film Festival, we are spoilt by the range and quality of performances - and we get to wear our hiking boots!


Last night we went to see Alan Doyle, a favourite Canadian folksinger/actor/author from Newfoundland best known for being the lead singer of the band "Great Big Sea".  Unfortunately, a major snow storm and a vehicle breakdown caused the performance to be delayed for two hours.  As we were readying to leave Canmore, an e-mail pinged through that told us this, so instead of having to wait outside the locked concert hall doors, we just settled back into the sofa, topped up our drinks and left at 8:45 instead of 6:45.  We arrived at the concert hall with just enough time to briefly catch up with some friends, then we filed in to find our seats.  The band, on the other hand, literally screeched into Banff and ran on-stage. 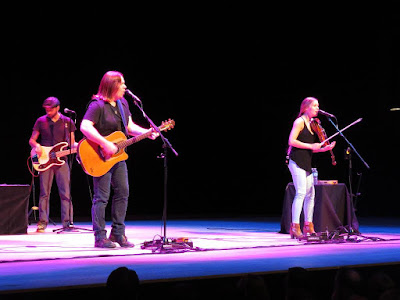 It was fabulous! The stories, the Celtic-influenced songs and the fiddle made for a kitchen party (a Newfoundland tradition of food, music and stories) vibe.
Posted by Kate at 2:14 PM