COVID lockdown has enabled us to knock off items on our longterm to do lists.  Things such as touching up chips in the paint in the hallway around the house, rearranging the artwork and sorting out the coat closet where things had been shoved the day we moved in.  Those tasks are the "nice To Do" list - they are things that have minimal impact on your day-to-day life but give smug satisfaction when they are complete.

It was while sorting out the coat closet that I came across the bag of courtesy flags from our trip on Popeye from Thailand to Australia.  The six flags (Thai, Malaysian, Indonesian, Singaporean, Australian and Canadian) were in varying degrees of discolour and tattiness.  They represented a grand adventure but, really, what to do with them?  Toss them?  Ohhh, that's as tough as parting with baby memorabilia.  Are you even allowed to toss flags? What is the etiquette on flag disposal?  Hang them?  Hmmm, faded, tattered and torn nautical flags are not a fit in our mountain-themed decor. Thankfully, an epiphany presented itself!

Inspired by the beautiful quilt Rachael made me when Dad died, my own quilt seemed the perfect way to preserve the flags and create something useful. The fact I had never made a quilt and knew absolutely nothing about the quilting process was no deterrent! So Google was consulted and I learned about batting and backing and binding and walking feet.  I created the design and discovered the quilt needed to be queen-sized to accommodate the flags.  This was in part due to the Indonesian requirement that their courtesy flag had to be bigger than the boat's national flag.  The Indonesian flag is huge!

A trip to Fabricland supplied me with the thread, needles, fabric, binding and batting that the Internet said I needed. The Internet also told me I needed to buy specific tools at great expense.  A rummage through various boxes in various cupboards supplied old sheets for backing, a carpenters' set square, a cutting board and a rotary cutter, not quite as the internet insisted but I was sure they would be adequate for my needs.
I was very pleased the design asked only for four little sailboats as I cut and pinned and stitched.  I discovered that having fourth year university maths is a distinct advantage when quilting. 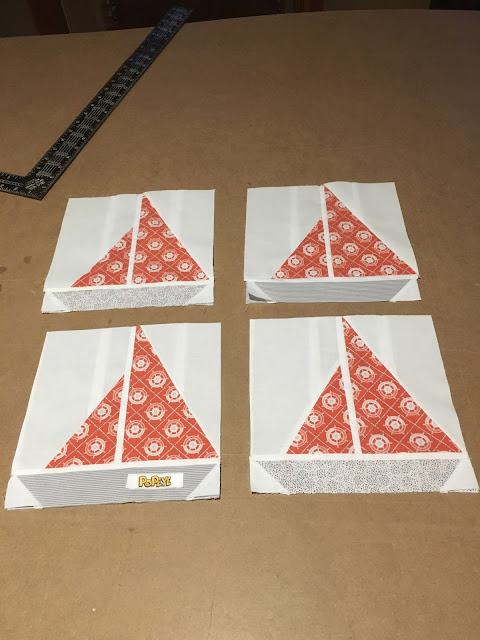 We decided that I could not make a "Thailand to Australia" quilt without a nod to Monkey. So we organised to have a photo of Monkey printed onto cloth to incorporate on the back of the quilt. This took a little time and while I was waiting it did occur to me that perhaps I should have a little practice before I attempted to quilt a queen-sized quilt.  Having enough fabric and batting left over, I whipped up a couple of matching pillowcases! 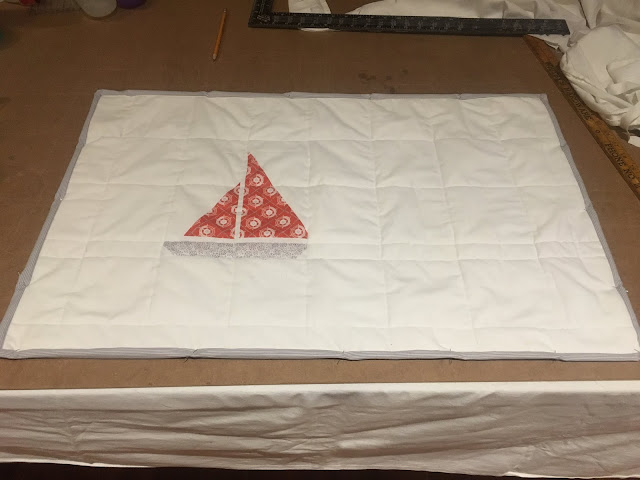 Then in a flurry of pinning and taping and stitching and unpicking and restitching, double-checking with the Internet, head scratching, ironing and more stitching than one could ever believe was possible ever, the quilt was finished. Ta da!