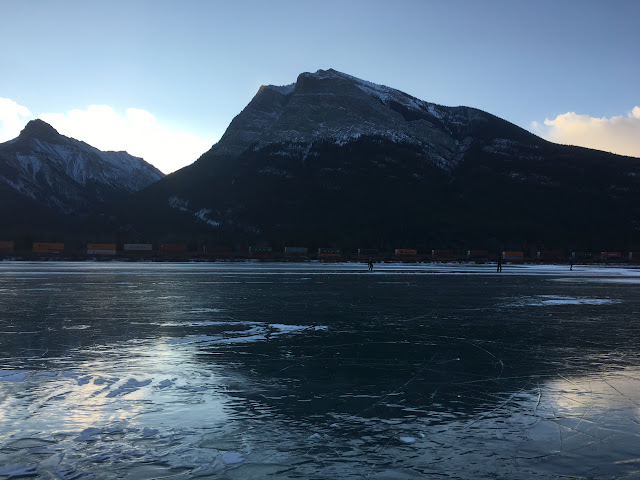 It's known locally as Wild Ice. It is a phenomena that occurs for only a few days a year, early in the winter.  It is when we have a sustained deep dip in temperatures as winter approaches, causing lakes to freeze before the first snow fall, thick and safe enough to skate on.  From a distance, it looks like water with the surrounding mountains reflecting on the ice.

This year we had that cold snap, so a flurry of posts to the local Facebook group began to appear, as anticipated as the first few kernels of popcorn on a saucepan over a fire.

"Get your skates sharpened.  It's at least 8 cm think at Gap Lake."

"Has anyone tested Lac Des Arc?"

When we felt it was safe (because those who are too keen and too early can and sometimes do fall through), we made arrangements to meet Rick and Sue early, while the morning air still held some bite.  The days are getting noticeably shorter, making it feel that much more of an intrusion on time that should be spent in bed, or huddled at the kitchen table with both hands wrapped around a warm first mug o' tea.  Driving along the secondary highway, the one that doesn't carry all the tourist traffic, with headlights still necessary to the agreed-upon meeting place, we pull into the deserted parking lot and kill the engine.  From the back of the van we remove the bag of skates, the hockey sticks and a milk crate to sit on at the water's (ice, really) edge.

Rick and Sue are only a few minutes behind us.  We strategize about where to plop ourselves and equipment so as not to damage the skate blades by using them to wobble over rocks and to not have to penguin-walk too far in our shoes on slippery ice.  Although the sky above us is now light, we will still feel cloaked in darkness until the sun makes it's way above the peaks that create the Bow valley and it's not-warm-enough beams reach us.

It is a magical feeling skating across a lake.  Through the ice you can see the lake bed - rocks, mud, weeds and sometimes, the odd fish.  The ice doesn't freeze exactly smooth and the imperfections cause a bumpity-bump feeling as you glide along.  Moving away from shore feels odd and an on-shore breeze holds us back more than you think it should.  Our legs feel stiff and heavy to start with, for the first twenty or thirty strides.  As we get further out, muscle memory takes over and we are able to take longer, smoother glides.  There is hardly anyone else on the whole lake and we feel very alive and humble and in awe of the beauty of this little nook in the mountains.

This part of Canada is a wondrous place - and not just in the middle of summer.