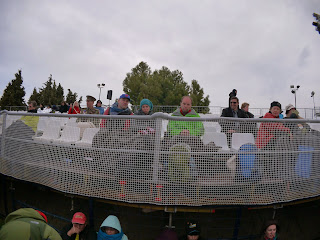 Cold, sleep-deprived, hungry, dehydrated, bored and COMPLETELY OVER being at Gallipoli - that was what all ten thousand of us were by about 11:45 am.  Imagine what we were like by 3 pm when they announced that they were finally starting to load busses for the six hour ride back to Istanbul.  That was NOTHING compared to our moods as we realized that it was taking them about seven minutes to round up the specific people to load a single bus of forty-two people.  Do the math.

By 7 pm, the temperature had dropped into the single digits. The one little coffee vendor had long since stopped selling ten-dollar thimbles-full of coffee, closed shop and headed up the peninsula. They began passing out emergency thermal blankets and were barely fending off the angry mobs. It's a good thing Aussies suffer in silence so stoically.

We really wouldn't have missed this ANZAC Day event, but we wouldn't have said 'no' to a chopper ride out of that place 15 minutes after the wrap-up (we are sure Charles and Harry had a few extra seats in the Skorsky).

A day of recuperation at the Diamond Royal may be in order.