After meeting our tour in Istanbul at 11am, we finally arrived at the commemorative site at 1am following a long bus ride and extended waits at the six separate security checks. 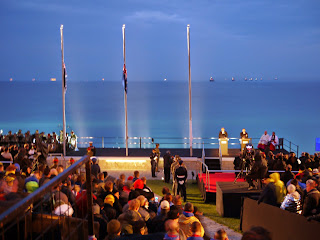 The seating stands were full and real estate on the grassy areas in front of the presentation podium was tight.  We therefore parked ourselves on the edge of the road directly behind the media. With four and a half hours to wait until the dawn service, it was impossible to lie down and sleep - no matter, there was much to see until then.  There was a reflective programme and documentaries shown on massive display screens; performances by the military bands; cultural groups; the Terrace-All Hallows (Brisbane schools) choir and information videos on arrangements following the service.

The service itself was haunting.  All was dark until the master of ceremonies began recounting the preparations by both the Turks and the ANZACs, as lights gradually began to illuminate the waves lapping against the shore, helping us to imagine the peace of this cove before the battle.  As the service went on, the sky became brighter, the birds started chirping and the silhouettes of the rugged cliffs became visible.  Mesmerized by the account of the event, we hadn't even realized dawn had broke. The feeling for reverie was tangible through the whole crowd. It is horrific what happened in this very place one hundred years ago.

John Key (NZ PM) and Tony Abbot (Aussie PM) spoke beautifully but Prince Charles' reading was the highlight.  He was extraordinary and brought tears to many eyes. I guess he has a lot of practice! The Ode of Rememberence and the Last Post were spine-chillingly haunting. The sail-by of warships, about a dozen in total, was impressive. Perfectly lined up coming directly towards us, you could see their lights in the dark.  Then, they turned starboard and sailed across as a back drop as the sky lightened and their silhouettes receded.

The spot we picked had an advantage past the clear and unobstructed view. Following the service, we were interviewed by both Channel Ten and Sky News, ended up on the television and with our picture in the Sunday Telegraph in Sydney! The media crews had been there since 8am on 24th and had watched a lot of the security set-up. Talking to them let us know of the four or five teams of snipers in the bushes above the commemorative site and an 11km exclusion zone for all shipping.

After the service, we walked up to Lone Pine. Fully-armed soldiers in camouflage gear stood just off the path. Their bright blue berets and big smiles rendered them non-threatening but you wouldn't dare step off the path. They had camped out overnight as evidenced by their kits stashed in the bushes nearby. 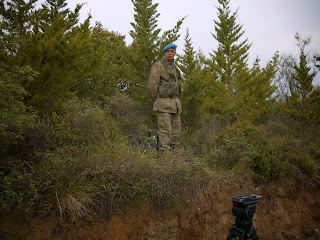 Due to the tight security, we were unable to wander around and explore. Disappointing but we had anticipated this. We were able to visit Shell Green Cemetary. The Gallipoli cemeteries differ from others in that there is no individual headstone for every grave.  Less than one third of the bodies were identified therefore, only those have headstones.  The others are commemorated by a special memorial in each cemetary and their grave lies unmarked.  The cemeteries are are thus large, grassy areas with few headstones. They are beautiful but lack the gut-wrenching enormity of the fatalities experienced when visiting the cemeteries of France - until you see the hundreds upon hundreds of names listed on the memorials. 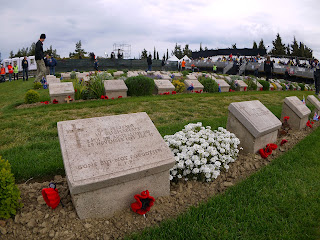 At Lone Pine, the VIP party, including Princes Charles and Harry, wandered around openly.  Such are the advantages of tight security and remote locations.  Sean got within a handshaking distance of both of them.

The Lone Pine service was for the Australians.  There was a service at Chunuk Bair for the New Zealanders and one at the 57th Regiment Monument for the Turks. Each service was restricted to each nationality. The service at Lone Pine was lovely, but a little repetitive after the Dawn Service. 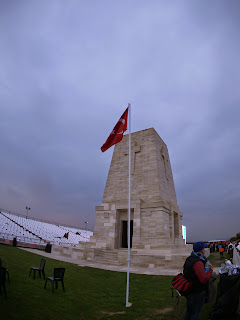 Sean went into the whole event fully appreciating the Aussies' respect for ANZAC Day, but not understanding that it wasn't war and battle that were being glorified.  The presentations, speeches and readings underlined that very few wanted Australia to be part of that battle.
It was the mateship (a new word to Sean, specific to the Australian culture with a very solemn meaning) that caused those poor soldiers to throw themselves into a hopeless endeavour, and led to the commemoration of this awful moment in history.

We will remember them. Lest we forget.