Leaving Sean to enjoy the charms of the Mornington Peninsula in the Summer, I embarked on a fleeting solo trip back to cold and snow of Calgary.  The purpose – Notice to Appear to take my citizenship oath and become a Canadian Citizen! 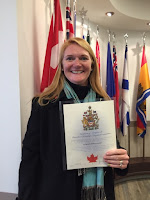 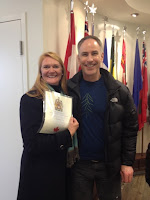 Typically Canadian in the administration volume and with lengthy line-ups, 91 new Canadians from 31 countries raised their right hand and swore the Oath of Citizenship, in both French and English.

It was fabulous that Nicola, James, Elizabeth, Anne-Marie and Rob were able to witness the historic event - and thanks to Anne-Marie it was real time on social media! 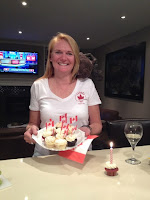 Naturally, every great event needs to be celebrated so the Toutant Family threw me a wonderful Canadian-themed party!

It is nine years since first arriving in Calgary on a six week assignment. I never imagined that I would be staying, and even further from my thoughts was that I would be married to a Canadian and surrounded by large network of the most wonderful Canadian friends. It certainly has been one of life's greatest adventures.

Not only has Kate abandoned Flinders - so have Graham and Gabby!  I've been left in charge of the horses, cows, a 5-month-old baby calf that is being bucket fed and (most alarmingly) the houseplants.  Apparently, I'm expected to keep everything alive.

I'm still able to get out on my bike for some cycling on the never-been-sanded roads around the peninsula; I've been able to get Kate's 1965 MGB running and back on the road; I've made my way into Melbourne to visit friends, volunteer with the St. Kilda's Triathlon AND take our cute-as-a-button amost-two-year-old friend for a splash at the local pool.

Even though everyone has left, I'm rarely lonely.  When I get  back from my outings, there's usually someone around, waiting for some attention.