Four days ago we left Langkawi and started towards Klang.  As the mechanical issues had eaten into our slack time, we needed to get to the yacht club where we were meeting the others, so we made way under motor and travel through the night.  I’m glad that I had night sailing experience, because otherwise, I might have been terrified.

One’s depth perception doesn’t work when all you have to focus on is a tiny spot of light.  There are different colours of lights, different configurations, different rates of blinking, different numbers of flashes and each should mean something.  Mariners have worked out and agreed upon a system of how lights look to others to make traveling at night to be less harrowing – unless you are a subsistence fisherman in Malaysia or Thailand.  These guys just figure a few red blinking lights (think: bicycle warning lights) is enough to be seen, so hanging a few off the rigging will do the trick.  We became good at spotting them, even through a few drizzly rain showers. 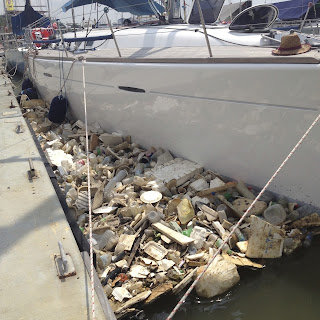 The amount of flotsam in the water began to increase too.  Coming into the port of Klang involves coming down a channel that could be busy – there was a bulk mineral port there.  We managed to navigate past the 50+ metre-long ships anchored and underway, then wiggle our way into the river mouth that led to the Royal Selangor Yacht Club.

The yacht club sounds much more glamorous then it was.  Craig, who had been to the yacht club before, described the port as ‘a shithole’ and I would be hard pressed to prove him wrong.  The buildings of the yacht club were quite lovely and grand.  It was the surroundings that took our breath away.

The locals are in the habit of dumping their garbage into the river (no exaggeration – we saw dump trucks across the river doing it at low tide) and hoping the current and the tide would take it away.  It tended to just slosh it up and down the river for a few days before finally taking it out to the strait.  The floating stuff came down past our boat for most of the time we were there.  It was a shame to see this, all washing out to slowly decompose.  The plastic bottles and Styrofoam were the most disheartening to see.  I was going to be very happy to get out of there.  We tied up the boat at the dock and headed for the hotel and whatever cold beer we could find at the restaurant.  Once we were there the race crew – Richard, Geoff, Henrick, Martin, Adam-and-Steve, Matt, Bruce and Lisa – trickled in, one by one.  They all seemed fun and easygoing.  Everyone was pumped to get on board and get racing!
Before we could, there was more setup to do, and this was just the bunch to get everything done.  Sheets were re-run, sails inspected, systems set up and more provisions bought and stowed.  A day later, we were ready for race start.