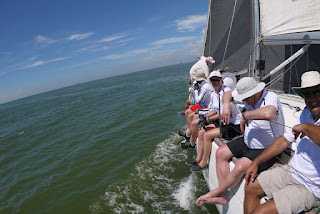 The first race was a passage race, meaning that it takes place between two ports. We are one of five boats in our class (based on size). The race director was on a 20 metre-long police boat at the start and was giving five minute, one minute and start countdowns on the VHF radio. We were across the line for the first race exactly as we wanted, and we were then off to Penang. As we had the wind coming from behind, all the boats had their biggest sails (their spinnakers) up – what a spectacular sight! 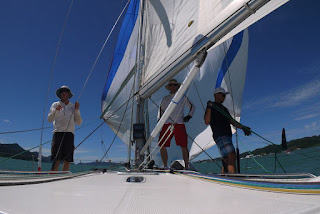 Some of the other boats in our class had gone to great lengths to lighten their boats – removing anchors and chain, personal items, seat cushions, etc. – which we chose not to do. Light boats go faster in light winds, but they can get tossed around if there are strong winds.  The lighter boats began to pull away from us in what seemed to me like slow motion. The top speed of our boat under sail varies from 4 to 13 knots (7 – 21 km/h) depending on winds, but the 72 nautical mile distance we would be traveling would mean that we would be 9 – 12 hours before we arrived. Much fuss about trimming, or getting the most from the sails, was taking place on board, too. 0.1 knots makes a big difference over that distance. Everyone had an area that they worked most of the time (foredeck, helm, sail trim, ‘strings’, navigation, skipper) but we would jump in to help at another station if someone sang out for help. There always seemed to be adjusting that needed to happen for the whole twelve hours of the race. We arrived in Penang at almost 2 am after a long, slow passage with very little wind. We had finished fifth out of five – very disappointing.

Our next race was a short course race, or ‘around the cans’. Bouys are placed roughly two nautical miles apart and the boats all do two laps around them. As our crew got to know each other and the boat, we inched up in the overall rankings. We had two second place finishes, a third and a first place. We ended up finishing second overall. My comfort with the raising/lowering/trimming of sails has jumped leaps and bounds. I’ve also had a good crawl around Craig’s boat and helped him fix a number of engine, electrical, rigging and steering issues. I can see that the problem solving aspect is going to be something that I will love about ownership.

Living aboard during the race has been an eyeopener, too. Everyone got along famously, although when we were racing those with extensive sailing experience sometimes had differing opinions on sail trimming. The Beneteau we are on was meant to accommodate four couples (in double beds) and a quarter berth for a single person. We had as many as ELEVEN on board and we were the only couple. A few of the crew were sleeping on sailbags and some in the cockpit on cushions. The galley, companionway and cockpit were always heavy traffic areas. There were bags and gear everywhere. As Kate and I were on the boat early, we snagged our own aft berth and set up shop there – just the two of us. It became a common changeroom and we sometimes had to evict people out of the bed, but it was convenient to have a single place for our stuff.

Now, the race is finished. We will be sailing up to Phuket with a much smaller subset of the crew (just us, another couple and two others), with plans to stop at some nice anchorages and coves along the way.