We are enjoying our meals in Turkey, and not because they are fancy.  We are eating lentil soup, goat cheese, salad greens, onions, tomatoes, cucumbers, stews, lamb, chicken, beef and fish that has been cooked over open fires, pita bread, olive oils ... all of it fresh, local-garden grown and FULL of flavour.  The tomatoes actually taste like tomatoes! We are eating peasant food, and it is likely the best thing that could be happening to us (nutritionally).

As marvellously affluent as Calgary is, there is little hope for the 100 Mile Diet being reality there.  We are presented with food that has had to come a long way to reach us (even in the organic, whole-foods shops).  Here, a 100 Metre Diet is a very real possibility. Being out in the fresh air, hiking and climbing certainly helps build a healthy appetite.  Strangely, we are filling up on the smaller portions and sleeping very well in our hole-in-the-wall hotel.

As yesterday ended up being a lovely, warm, blue sky day, we did an organized day trip to a hike near Aksaray, some 1000+ year old cave churches near Gökçe and the underground city at Derinkuyu. Seeing wall frescoes that have survived from before the Christian Crusades is impressive. 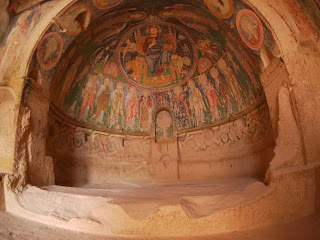 At one point, Kate and I had the little cave chapel to ourselves and so I decided to test the acoustics.  Trying to decide what would be appropriate to sing, I was able to recall the Latin lyrics of Ave Maria.  I must say that music and sound chamber came together to create a beautiful moment.  The underground city was hugely impressive to Kate's engineering acumen. 8th century peasant farmers created concealed dwellings under their villages and fields that reached down more than 50 metres, included provisions for water, food and livestock storage, ventilation, common cooking areas, defence (in the way of stone doors, hidden entrances and traps against invaders) and even a morgue, allowing the whole area's population to stay hidden for months at a time, if necessary.

We are also enjoying the "slow travel" aspect of our trip.  We are watching people appear at the hotel with less than 48 hours to "do" Cappadocia.  We have the luxury of reading a trashy novel for the afternoon if it suits us.

We are having a marvellous time. 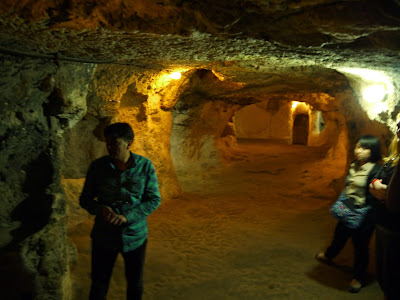