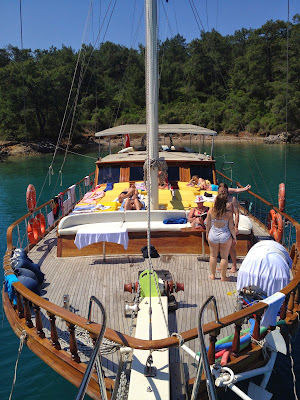 We are aboard the gület Hemera, along with twelve other passengers and three crew.  We boarded three evenings ago and it started much like summer camp.  There were shy and quiet introductions, stating names, relationships (for couples) and home cities.  There were four Aussies (including Kate), four Dutch (all English speakers), two Brits, two Americans, one Turk with enthusiastic-but-minimal English, and Sean, the Canadian.  The crew spoke a bit of English, so we could mostly communicate.  Meals were included and prepared in the small, three-square-metre kitchen and were hardy and delicious.  Tomatoes, eggplant (aubergene), bread, cheese, eggs, rice, fish and pasta were the staples with fresh fruit and veggies, too.  A good-sized (for a boat) cabin with a private en-suite made for a comfortable retreat from the sun and/or the activity of the ship, too. 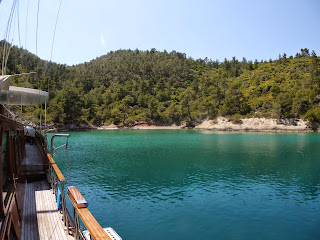 The days have been magical.  We awake to the activity of the crew from behind bulkheads - smells of breakfast cooking; the sound of seawater being slooshed (by bucket) across the deck; muffled Turkish commands from the captain as the routine work is being done ... The keen among us can have a pre-breakfast swim.  The rest emerge from cabins a few at a time.  After breakfast, another swim opportunity, with a side ladder, gunwhales and the top of the pilot house providing your preferred way into the water.  We are anchored and stern-tied in a quiet cove with opportunity to swim, paddle, snorkel, explore or just float - this lasts until lunchtime, when we all reconvene at the group table at the aft, sit down to a magically-prepared meal, watch the dishes disappear, then find our lounge cushions at the bow and wait whist the captain pilots us to a different, but equally lovely, spot for a swim in the late afternoon.  This is how our days have been. 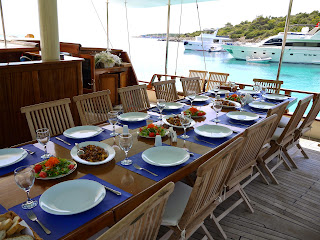 The terrain here is rugged - volcanic rock, piled steeply up from the sea's edge and populated with squat, wide, wind-hardened trees and scrub bush.  The little coves we have landed in feel very secluded and private - a tribute to the captain for creating this illusion, as there are hundreds of these gülets out and about right now.  There is a steady and light breeze - perfect for sailing.  We will be motoring for the whole trip, much to Kate's and my dismay.  Schedules will be easier to keep this way, and not all of the passengers would fare as well (or have as much fun) as we would if we were at a 15 degree angle.

I do think that a week of being together is about the right amount of time.  We are getting to know each other ... just enough.  We are widely spread in ages.  The youngest is 23; the oldest is 67.  People with much life experience (and some with very little) makes for interesting meal conversations.  Sheltered and/or differing world views emerge.  No advice is given, but many knowing smiles and nods quietly happen.

After a frenetic initial pace of activity (unspoken diving competitions and dinghy rides ashore), we have all settled down to a calmer pace for the remainder of the voyage.  Books, eReaders and notepads have emerged.  Young love; budding romance; lust; even old, weathered-but-granite-hard-and-steadfast companionship are existing on this vessel, peeking from around the corners of conversations and from behind the answers to introductory questions.  It is fascinating to be part of.

I truly enjoy meeting people and trying to fathom the lessons and examples they have for me.  Being in a confined space encourages things along.
Posted by Sean at 12:31 AM