Stepping out of Frankfurt Airport, having come from there straight from Athens, we noticed immediate differences.  The crowds didn't seem to press into us.  Train departure times were given in one-minute increments, rather than a rough hour.  The walls and floor tiles were all in perfect order, and looked like they would remain that way for the next few decades.  Announcements come over the intercom in German, followed by almost-unaccented English.  We've travelled only 2,000 kms, but we are in a very different culture now.  It's very Western here.

After less than two hours aboard a sleek, comfortable high-speed DeutscheBahn train to Offenburg, we were met by our friend Florence.  She drove us back to her home in Bischoffsheim where we are now spending ten days under her and her family's roof.  Bischoffsheim is a scenic provincial village that is 30 kms from the Rhein River and the German border.  Although it falls under French authority now, it has changed hands four times in the last hundred years between France and Germany.  Like many European regions in similar circumstances, they identify themselves by their region (Alsatian) rather than their nationality.

Although not nearly as ancient as Greece or Turkey, Alsace is old.  It's older than what Kate and I are used to, but it took me until just now to realize why I continue to be amazed at the antiquity of the houses, barns, orchard walls, fresh water wells, town spires, cobblestone laneways and rough-hewn timber fences. They are remarkable because at the relatively young (by Hellenic standards) age of 300-400 years, they are still being used in the exact same manner as when they were put in use in the 1600's.  It lends to a feeling that you might pass a feudal peasant around the next corner in the village, or see one tending the grape vines as you are out for a stroll along the now-paved cart tracks cut through fields and conveniently connect settlements as non-motorized means of conveyance.

This time of year, everything as green and lovely.  The grape vines are covered in leaves; the flowerboxes that adorn almost every domestic windowsill are full of geraniums.  The temperature is in the high twenties and although a rain shower may rumble through the area occasionally, it usually doesn't stay for more than half an hour.  Kate and I try to stay out of the way as the Bouviers go about their lives.  Christophe and Florence are up early to push Thibaud and his eight-year-old sister, Lou, out the door to school by 7:30 and then leave for work themselves.
We wake up later and keep ourselves busy with walks to nearby villages - an easy task as most communities are less than four kilometres apart.  Obernai, a slightly bigger town north of us, has a market on Thursdays in the town square.  The big draw for us is the fresh produce - strawberries, cherries, vegetables, chickens and pork - not necessarily to buy, but just to see, to smell, to experience the busy throngs.  All of this takes place, and has taken place, with very little change from how it went on for hundreds of years.  I'm a bit jealous of the grounding that it must give the people that call this place home.

This is my second, and Kate's seventh or eighth, trip to Alsace.  The Bouvier family generously include us in their lives - we were attendees of the Grande Fête to mark the end of Lou's school year last night - but that is only part of what draws us here. The scenic towns, the hundreds of kilometres of bicycle paths; the delicious foods; the tasty, inexpensive wines; the delicious foods; our desire to improve, or perhaps grasp a basic usage of the French language; the delicious foods ... they all conspire to make Kate and I want to return here, with our bikes, for a summer of French language studies, cycling and perhaps some delicious food.  Furnished apartments are commonly available for rent here in the summer months.

The big question for us is, "When do we fit this into the schedule?" 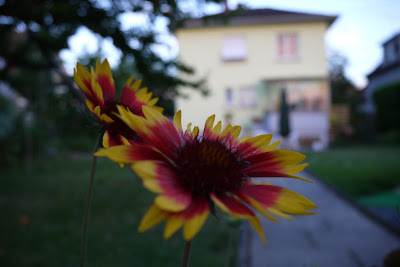