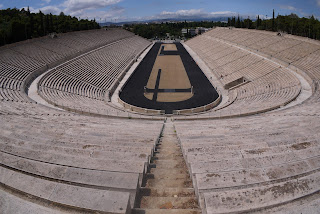 We have explored Athens (or at least that where ancient Athens stood), the Acropolis, the Ancient Agora, the Temple of Zeus, Hadrian's Arch, the Plaka, the flea market and ruins of many important monuments that now escape our memory. But what impressed us the most was the Panathenaic Stadium. Not just because it is functional but for Sean, it is a sports stadium and for me, the original (from roughly 500 BC) storm water system is still in use! 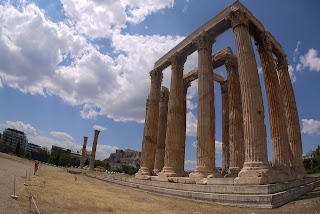 Constructed completely of marble with amazing acoustics, the stadium hosted the athletic events of the ancient Olympics until they were banned by the Christians for their pagan bent - honouring the Goddess Athena.  They were renovated for the first modern Olympics and hosted the finish of a new event - the marathon. In the ultimate feel good outcome, the Greek, Spyridon Louis, won the first marathon but fortunately failed to repeat in full the legend of Pheidippides who as the inspiration for the modern event. Pheidippides was the Greek messenger who ran from Marathon to Athens to announce the defeat of the Persians in the Battle of Marathon, delivered his message and promptly collapsed and died.
Posted by Sean at 9:17 AM