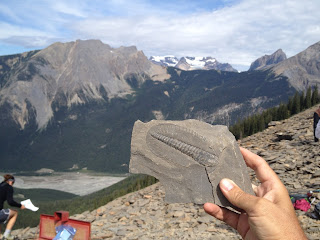 The Burgess Shale Fossil Bed is a large deposit of Cambrian sea-creatures. Yes, this mountain top was once-upon-a-time, the seabed.  The area is protected and can only be entered with a permit, or in our case, with a guide!

Under a cloudy sky that was threatening rain, we met our Parks Canada guide, Amy, at 7am (groan) in Field.  She was perky, chipper and managed to get us all in a good mood about trudging up nearly 800 vertical metres of mountain in what could have been a wet, cloudy day.  We started up the trail and the lower slopes of Mount Stephen, working our way through the lush forest; it was quite spongy underfoot.  A lot of moss and tiny lilies.  This side of the Divide gets a lot more rain.

And then...  we started to climb.  And climb...  Along the edge of cliffs and up ridge lines, the trail switch-backing when it could.  In the 3.6km, we gained over 800m; 200 of those in the last 300m! The weather had quietly eased off the threatening clouds as we made our way through the forest.  When we emerged above the treeline, the views back over Field to Mount Burgess and Wapta Mountain were spectacular.  However, what we were there for was underfoot. 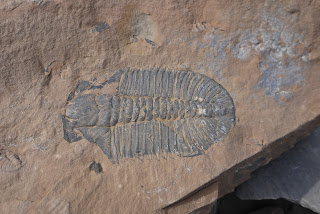 At first glance, it looked like nothing but a rocky slope.  But every other piece of shale contained a part of a fossil, a whole fossil or several fossils.  Dozens of ancient sea creatures embedded in the rocks.  Some straight out of a science fiction movie and some remarkably familiar.  To my uneducated eyes, I found a modern day limpet! It was extraordinary.  We discovered trilobites, ostracods, hyolothids and other fascinatingly looking and named creatures.


With gravity on our side, the hike down was not the cardio workout of the climb but careful footing and a firm pole plant required to prevent a very rapid descent. We slept very soundly. 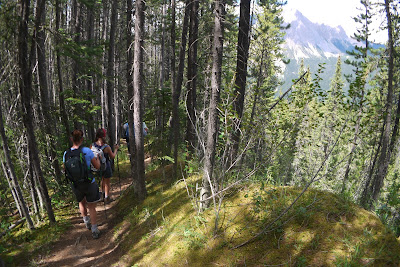