Two years ago, Lou (my French Goddaughter) asked if we could attend her first communion.  Having been given such good notice, we accepted with delight.  Twenty months and eight thousand kilometers later, here we are.

Great excitement was rippling through all the 9 year-olds of Bischoffsheim as today is their first communion.  In the Bouvier household, the day began with gifts presented to Lou, the god-daughter de jour.  Outfits had been chosen and lovingly pressed.  Hair is coiffed into braids and buns and twisted with flowers and a thousand diamantés.  Friends and family are gathered to witness the great event. 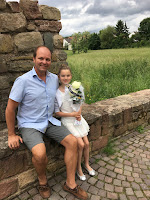 Ma Belle Filleule was so excited, she slept with her lovingly pressed clothes - much to the delight of her dear Maman.

Sean and I followed along with the service, standing and sitting at all the correct times and we both managed the rhythm of The Lord's Prayer in French. The eighteen kids involved in the ceremony were proud as punch with themselves and carried out the well-rehearsed ceremony flawlessly.


The scene outside the church was clutches of proud relatives, recently-released, freshly-anointed youngsters and a general air contented festivity.  At Lou's request, Creperie Chez Dom was the location of the 'after-party'. Here we were treated to the most fabulous four course luncheon. Our French had a good workout with very patient friends and Sean had the opportunity to flex the German portion of his language skills with one of the Bouvier's neighbours.  All in all, a grand event! 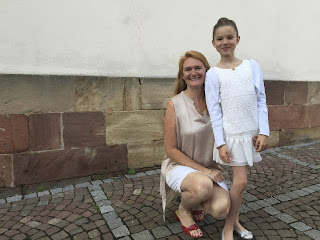