We jumped on the train this morning and were out exploring Milan before lunch! We lost time in the Leonardo Da Vinci National Museum of Science and Technology. Despite the guide saying you needed two hours to do it justice, we managed about a third of it in four hours when it inconveniently closed!  The computing gallery contained an original Enigma machine and an Apple I, Apple ll and the first Mac and the telephony gallery had every cell we have ever owned - rather disconcerting when stuff you had is in the museum!

But what took up our time was the gallery where they had made models from Da Vinci's drawings. Amazing! Piling rigs, cranes, 'Bailey' type bridges, machines to measure the tensile strength of wires and strings, looms for weaving, carding (of textiles) machines and his flying machines. What a mind! Also some very cool exhibits on his town planning, water management and anatomy.

We wandered through Sforza Castel which was most impressive and sported a moat. Sadly, no water, alligators or marauding barbarians.  Sempione Park was cool and restful in the late afternoon heat. The Arco Della Pace (Arch of Peace) was rather familiar - Arc de Triomphe meets Brandenburg Gate.

We skipped seeing Da Vinci's 'The Last Supper' because you have to buy tickets to do so in advance and we simply are not that organized!  And there is only so much you can see in 8 hours on a stinking, hot day!!  AND no shopping, no shoes, no leather goods. A fail as tourists in Milan!!

As the major bike riding part of our trip is complete, below are a few observations.... 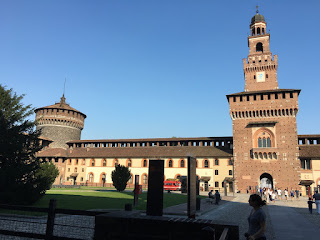