Kate and I are both enjoying the benefit of burning 2500+ extra calories a day.  We plow through whole pizzas (each), dishes of pasta, schweine schnitzel, French fries ... all in a hopeless effort to replace what we use up on our rides. 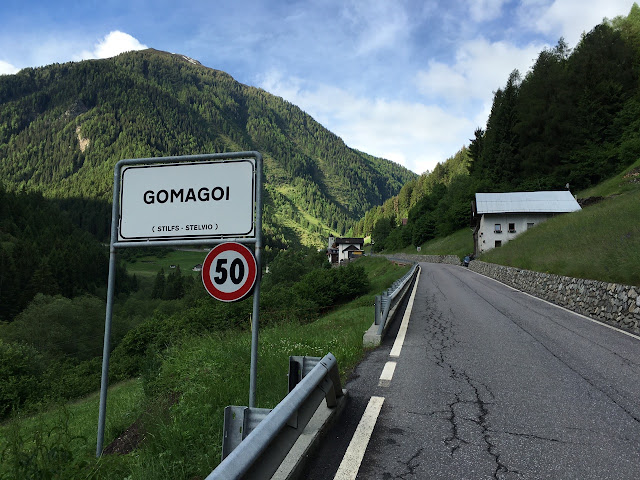 Although we start out with some fatigue in our legs each morning, we are somehow able to push through to the new Bed and Breakfast each night. Most mornings start out dreary but improve as the day unfolds. The ride from Chur to Bergün was very much like that, with a solid climb out of a valley towards the next day's mountain pass.  I love pedalling through the little clusters of homes (village seems too strong a word), even if there are gravel roads and hills involved. Our exposure to the locals is limited to seeing where they live rather than interacting with them.  I suppose this is a step up from the bus tours that whiz along the main highways, but still I feel distant from the culture. 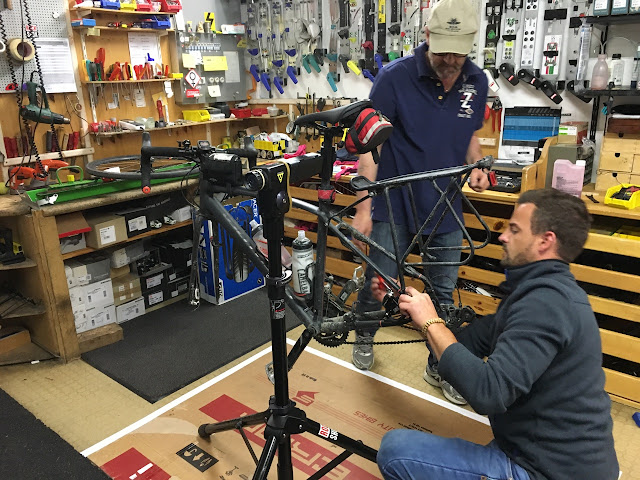 We do have our brief merchant transactions, though, to give us some insight.  On the way from Bergün to Prato allo Stelvio, Kate had a problem with her brakes on a big descent.  Luckily, at the bottom of the hill, there was a bike shop of sufficient size and experience to suss that her brake pads needed to be replaced and do the job.  While this was happening, we chatted with the bike mechanic. While Gord and I intently soaked up as much knowledge regarding the hydraulic/cable brake system as we could, I also was observing the two mechanics chatting and soaked in the laid-back atmosphere of the repair workshop. 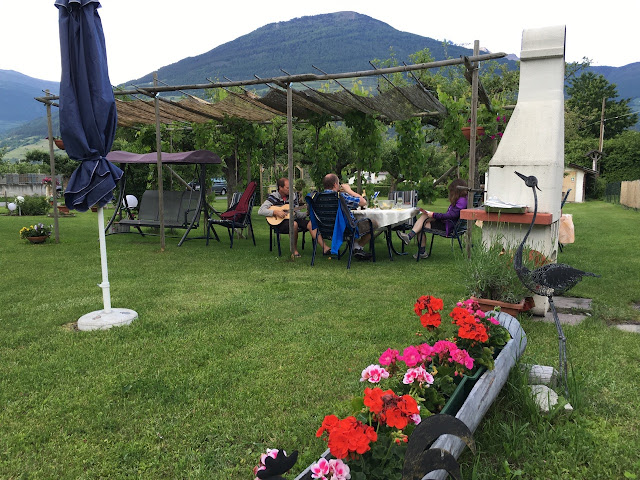 Another example - when we landed at the base of Stelvio, our bed and breakfast hosts had limited English but when they found out I spoke (what they thought was fluent) German, they were delighted and unleashed a torrent of local information and hospitality. The evening we got into Stelvio was quite pleasant, so we decided to make use of the available barbeque and picnic table.  After a few beers, I was wishing I had my guitar.  When Christinie, our hostess, checked on us, I asked (in German) if they might have a guitar. They seemed very apologetic that they did not, and in ten minutes one miraculously appeared - I suspect it was hastily borrowed from a neighbor or friend.  What lovely hosts. 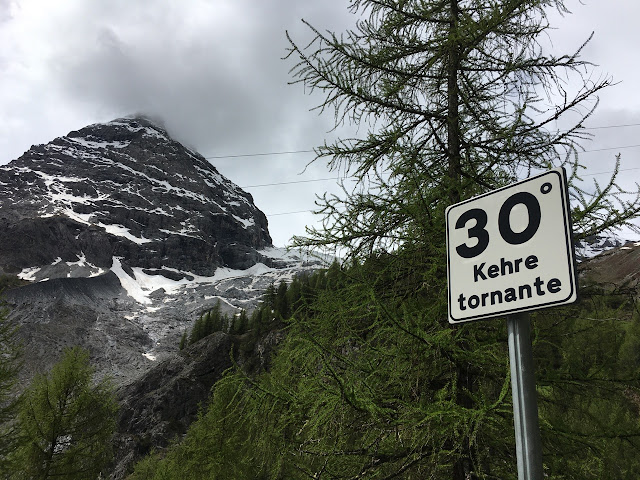 Now, the question on everyone's mind - how was Stelvio Pass?  Not as bad as you might think - just a long, gradual climb ... and very rewarding.  There were distracting views which made the climb easier. Most of the forty-eight switchbacks are signed with just a number - no explanation is necessary - to help you keep track of where you are in the whole ordeal.  We wound our way through scenic villages that seemed to clutch onto the steep hill.  The ambiance seemed to change with every kilometre - a new village, a change in foliage, a lone hotel, a new set of switchbacks.  As we grunted up a set of turns with our focus aimed down onto each pedal stroke,we looked up to notice the trees had suddenly disappeared. Scrubby alpine bushes and grass were all that lined the roadway.  There was some traffic (we claimed the outside edge of the  lane as no room for shoulders, let alone bike paths) but the cars and motorbikes and motorbikes and motorbikes mostly gave us a wide berth, seeming to appreciate the work we were putting into our trip up.  Just after the last village, there was a marked increase in the number of other cyclists on the road ... all on their way up. We learned afterwards that a large cycle tour had scheduled Stelvio in their multi-week, multi-summit tour through Switzerland.  A series of skinny guys thundered past, eventually trickling down to the middle-aged masses that we could keep ahead of. 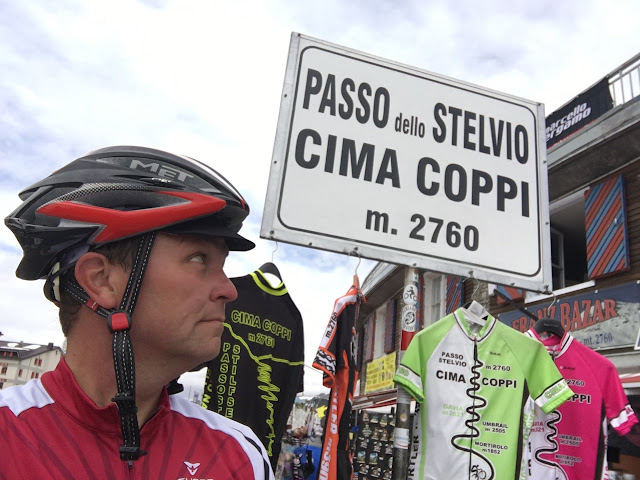 The top of Stelvio Pass had a circus-like atmosphere. There were tourist booths selling trinkets; a gondola leading to a ski slope (that was very much in use, even in June); hotels and restaurants serving both the motoring and cycling tourists and bratwurst stands!  I happily gobbled down a hot serving, knowing I'd easily burned ten times the amount of calories the sausage, bun and German mustard offered. Pictures were taken to document the conquest, layers were donned ... then came the descent.

What a fun ride down.  The traffic was manageable, so I was able to take liberties on the hairpin curves, helping myself to a a wide bank going in, cutting sharply across and swooping out, trusting the physics of my tires as I leaned into the turn.  Although my touring bike was built for stability and comfort, it let me enjoy all of the long, gently winding downhills.  I whizzed through the forests and past farmhouses and hotels I had struggled by a few hours earlier.  Four hours of climbing, rewarded by fifty minutes of delicious descent.

All together, it was a great outing with mixed weather, some mentally challenging riding with a circus in the middle.  No flats, no mechanical issues - just fun.