Today was our first long, extended climb.  It started fabulously, with a 15 minute downhill ride to a ferry that we had to ourselves.  We had a cruisey, gentle-roller ride around Viervald Stattersee (a big lake) and proceeded to climb through cool tunnels and snow sheds and across great spans of bridges.  Along the valley, we often broke off onto roads I might have earlier deemed unfit for a touring bike.

We have been following a marked route of cycling paths that are maintained by the Swiss Tourism Board.  The routes lead us along farmers' tracks and edges of flat, expansive fields; through steeply-edged valleys where goats, sheep, cows and the occasional herd of llamas cling to an impossibly sloped patch of grass; up, up and up single track footpaths to hidden meadows filled with wildflowers (we picked a great time of year to visit); right past front doors of farmhouses and entrances to barns.  The trails we are following are often older than the invention of the bicycle, so the incline of the paths, both up and down, aren't ideal for bikes carrying riders AND all their stuff. We are surprised at how many of the off-road trails are paved, but much of the farm track is not.

As the day wore on, the slopes more consistently lead uphill.  And the grades more often were 10 percent or worse.  The rest stops became frequent, but we stoically pushed uphill.  After reaching some roadside construction and being told there was a 100 Franc fine for proceeding through the roadworks on bicycle, we were horrified to hear squealing tires on the switchback below us.  We watched from above as a car slid into the guardrail where we had all stopped to rest just a few minutes before.  At our tortoise-like pace, none of us wanted to proceed the final few kilometres over the pass.  We cautiously doubled back down to Göschenen and caught the cog train (which ended up being quite a fun experience) to Andermatt.

The weather got worse as soon as we got off the train.  We eventually found our accommodation but because it was Sunday, we struggled to find ingredients to make dinner.  We opted for picking up a pizza, which the shop wouldn't deliver so we had to retrieve ... on bike!  We were all exhausted after the big climb, the big scare of a close-by car crash and a slight argument upon check-in but after all that, we are now safe, warm and well-fed. 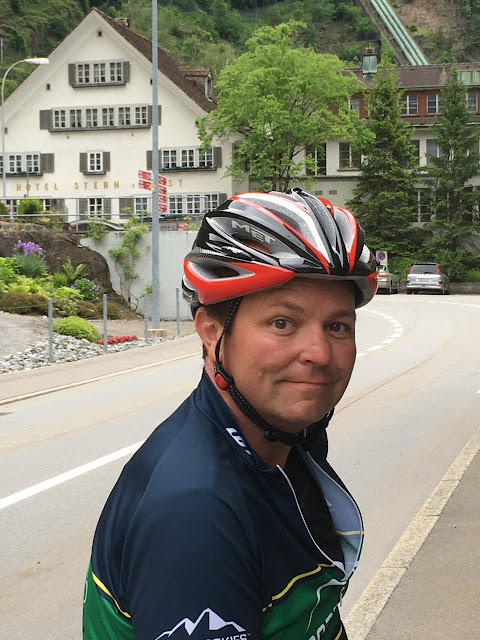