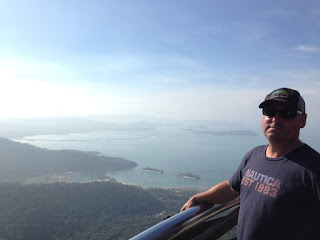 Who knew a trip to the Langkawi SkyCab would be so entertaining?

Our ticket to the SkyCab (cable car) included access to the SkyDome, SkyRex, 3D Art Langkawi and the SkyBoutique (exit through the gift shop!). So we did it all!

Timing things perfectly, we arrived before the crowds and headed up the world’s steepest cable car. Photographs were taken at every turn against the green background for purchase later. The process significantly slowed the queue – so smug we were early! We had a clear day and the views from the top were certainly spectacular.

SkyRex was the next on the agenda. This was a 3D ride which bumped and turned to the action, through a dinosaur themed park.

Between the marauding dinosaurs and a volcano eruption, it was rather twee but very well done. This set a high expectation for the SkyDome, the world’s only outdoor 360° theatre!

Well, we rocked out of there feeling slightly nauseous. The signs of "no vomiting" now made sense. It was an early IMAX film where we enjoyed a ride on a roller coaster on Mars. It is the closest I have been to being seasick on this whole trip – I actually had to shut my eyes…

Through the Sky Boutique to the 3D ArtLangkawi. With absolutely no expectations except air-conditioning, we were in for a treat. The walls were painted with works that had a 3D effect from a certain angle, just take the photo from the mark on the floor. And photograph we did. Huge amounts of fun! Who knew?