As we walked down the main drag of Labuan Bajo, the thing that stood out in my mind was how normal it all seemed - scooters outnumbering four- (or more) wheeled vehicles by eight-to-one; roughly surfaced roads with gravel-filled potholes; the rock-, gravel- and dirt-lined space between the road and shops containing parked vehicles, temporary tables with wares for sale, piles of construction material and/or rubbish; hordes of people, young and old, walking, working, doing commerce, smoking, lazing about, standing in groups as if waiting for the enthusiasm to do something … all this had a feel of familiarity to it.  We had become used to Indonesia.

The plan was to remain here long enough to find 340 litres of good-quality diesel, re-provision and possibly spend a night in a hotel (showers! air conditioning!).  Our research on anchorages at this town gave us a few choices and we selected one near a newish, 9-story hotel on the beach.  We found the hotel staff friendly and the price reasonable, so we decided we would book in for two days (the following day - we would spend the first night on Popeye).  Established as future customers, we felt justified in using their beach as a landing point and so left our dinghy and walked the kilometre and a half into town.

Labuan Bajo has an airport and is closest to Komodo National Park, so many coming to see the dragons will use this as a landing point from which to take tours.  As the National Park is a controlled fishing area, it is one of the few areas that has a good marine environment.  Much of Indonesia suffers from overfishing (as populations on islands grow) and poor fishing methods (like dynamite fishing or drift net fishing).  As a result, there are dive and snorkel tour companies galore here.  Backpackers abound, as do tour company hawkers that speak reasonable English.

There is also, for some strange reason, a huge number of restaurants offering Italian food.  We initially headed to town looking for provisions for the boat.  We found a great supermarket that provided us with not just essentials, but treats like beer, chips, cookies and even granola.  Right across from this super, supermarket was La Cucina, offering pizza, pasta and other Italian dishes.  AND fabulous coffee! We excitedly went for lunch first and enjoyed not just a marvellous pizza (each) but a great view of the bay … including Popeye.  During lunch we made the plan that tomorrow we would rent a Bemo (mini-van and driver) and buy a heavy load of supplies (read Bintang) and search for diesel. 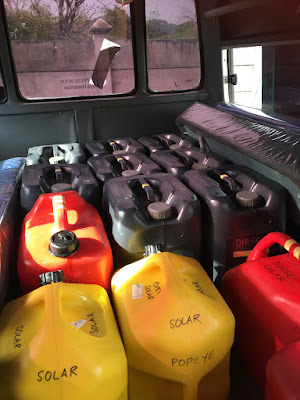 Buying usable solar (diesel in Indonesian) is reportedly one of the hardest things about cruising the archipelago.  Diesel is inherently organically unstable, meaning it breaks down over time.  How fast it breaks down will depend on contaminants that are introduced into it, including water. Smaller islands may not have gas/petrol stations and may import the fuel with independents.  These folks can go to a bigger islands, fill ANY type of container - old oil drums, old water containers, plastic jerry cans - and bring them back by ferry to sell on their island.  Buying from them often involves them going to their garage or shed, hand-ladelling the fuel out of said containers into whatever you brought to fill.  Worse yet, if you don’t have containers (usually jerry cans), they will need to deliver it to your boat by transferring it, heaven-knows-how, from their old oil drum into an old oil drum on a friend’s boat.  During the first fuel acquisition I did, I watched a guy MOUTH SIPHON diesel from his drum into my jerry cans.  Yikes.  We were very low on diesel and we HAD to have it, so I did my best to refilter it once we had it onboard and before it went into the fuel tank. 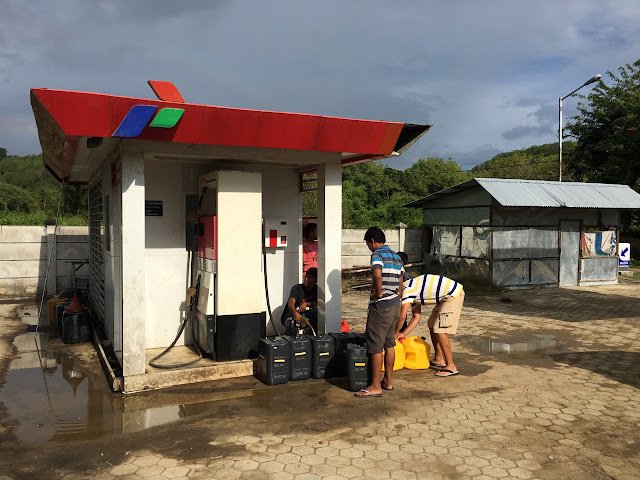 Good diesel is quite critical to your engine and your engine is quite critical to getting you around and out of bad situations.  After my first bad fuel acquisition, I wanted to know we were getting the diesel with as few transfers from the Pertamina distributor as possible.  I was thrilled when the driver we had arranged took us to the local commercial dealer, who could sell it in large quantities, and watched as he filled all twenty-two of my jerry cans from the nozzle.  Hooray! 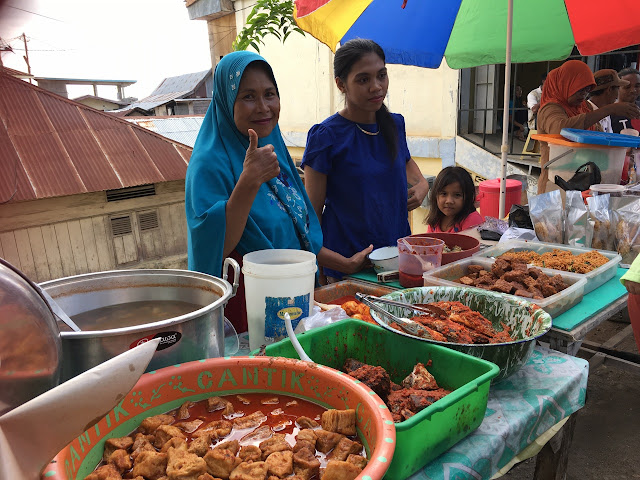 We ended up spending four nights in Labuan Bajo, trying different restaurants, having all of our sheets and towels washed in a washing machine and dried and folded, enjoying two glorious nights on the eighth floor with a balcony looking over Popeye in the bay, getting not just the needs but the ‘wants’ from Roxy Supermart, topping up Kate’s Indonesian mobile phone plan and having some time where we didn’t need to worry about sinking the boat.

The last thing we did in town was to buy 6 meals' worth of chicken (we think) satays and a potato and egg fried things - easy reheat dinners that we can enjoy as we make our way eastward.