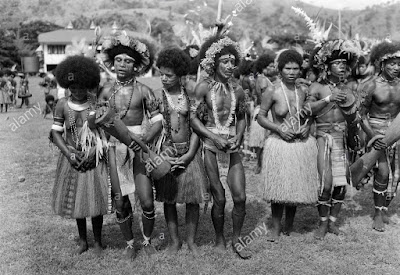 If someone said, “visiting a remote tropical island,” what images might that conjure up for you?  Palm trees on a deserted white sand beach?  Loinclothed men with matted hair and spears in dugout canoes?  Bare-chested women with grass skirts, barefoot, standing in front of a bamboo and grass-thatched dwelling?  A roaring fire on the beach, a whole wild boar on a spit, turning slowly to the rhythmic beat of hand drumming?  As we approached Pulau Babar, we had only the slightest idea of what we were in for.

When we arrived, we were tired.  We had done three 11 hour hops and then a 30 hour crossing that was particularly bumpy and hard-going.  We rounded Pulau Wetan and had the fishing village of Tepa in sight.  It was a somewhat sheltered bay, comprised of a village of thirty-five or forty decrepit-looking concrete and tin-roofed buildings and a substantial concrete jetty that went well out into the bay.

We dropped anchor by noon and managed to secure the boat, put up the sun cover and establish that Popeye’s anchor was securely dug in and we could finally rest.  We were salt-covered, sleep-deprived and completely over dealing with anything except our pillows.  And then they came.

A outrigged canoe containing Aristotle, Andy and the non-English-speaking fisherman that owned the boat came chugging up from the shore.  Aristotle, a slight, intense-looking man in his early forties, wearing ripped jeans and a years-old t-shirt and Andy, a short, sixty-ish unhealthy-looking fellow with a bad cough in an unkempt collared shirt and dirty dress pants (identifying himself as the local protestant priest) were the spokesmen.  Their driver, a tired-beyond-his-years forty-ish fellow, was unremarkable in an old t-shirt and shorts.  All three men were short with thick, dark hair and complexions.  The trio insisted on coming aboard to welcome us to their village.  Tired as we were, we didn’t want to be rude so we acquiesced and allowed them to board Popeye.  We offered water (cautiously avoiding offering alcohol, not knowing the local customs or taboos) and tried to make them feel welcome.

Aristotle’s main goal was to get us to agree to have him be our ‘guide’, even though we had not yet mentioned going ashore.  He informed us that he could take copies of each of our passports and give them to the chief of police, the harbourmaster, the army captain and the head of the village.  He advised us that cash bribes were not necessary for these officials, but cigarettes would be a good idea.  Also, we would be interested in a tour of the island, yes? How many days?  Kate was keen to see some of this remote island (keep in mind we had NO IDEA what we would be seeing or whether there would even be roads outside of the village) so I suggested that a one day tour would be interesting.  Aristotle needed a price to be established, right now, so we would know what we were paying.

“Tell me a price, what do you think is fair?” he asked.  Having no starting point, I threw out 200,000 rupiah (double the daily wage of a labourer) for a tour.

“Well, OK, we can go to the next village where they make coconut gin, then to a primitive fishing village, then to a waterfall.  Please bring money for water and snacks for all of us, fuel for the motorbikes, gifts for the head of the village, …”  he replied.

“Can I just give you 600,000 rupiah and have you pay all of that?” I finally offered.  He seemed satisfied with this and so packed up his contingent and left us in peace.  At 9:30 am, we were instructed to be on shore.  As soon as they left, Kate and I dropped in a heap and slept until dawn the next morning.

We woke to an overcast sky, but were in better spirits at having had some (15+ hours) of much-needed sleep.  We inflated our dinghy and headed to shore.  We found that a new addition to the tour was Dewan, a member of the Indonesian army that was stationed on Babar.  He had brought a brand new, army-issued Yamaha motorbike, not a scooter, for me to ride.

"Are you OK with this?" I was asked.  With bravado I said that would be fine, even though I hadn’t ridden a motorbike with a clutch and three-up-one-down gears for decades.  How hard could it be?  Kate climbed on the back, both of us helmet-less and in flip-flops and followed our guides along the broken asphalt-and-gravel road to the next village.

When we arrived in the next village, we were taken straight to the home of the local bootlegger.  The gin distillery was in full operation at 10 am and it was insisted we try the local brew.  By now, a crowd of locals had formed, including kiddies, oldies and everyone in between that could walk, limp or hobble over to see the white-skinned tourists in their village.


“It is tradition that each of us drink, and say ‘Kalweydo’ as a toast,”  Aristotle informed us.  A recycled water bottle containing a rosé-coloured liquid was produced - the local coconut gin.  So we politely drank, and then offered a small gift to the head of the village.  This made everyone happy, so we had to have another drink.  Next, we had to see the new communal house in the village, where dinner would be prepared for the whole village/family and everyone was welcome.  We all got up (the whole village that had assembled) and walked over to inspect the structure in the process of being built.  This called for a drink, so suddenly another recycled water bottle was produced.  Kalweydo sounded a few more times before we were allowed to move on.


Perhaps the primitive fishing village was a bit far away.  Would we like another drink instead?  It was maybe 11 am, but the stuff they gave us was becoming quite drinkable, so yes, we would have another glass.  Kalweydo!

Next thing we remember, we somehow piloted ourselves to the village that our boat was anchored off, at someone’s home, with bad Indonesian karaoke being pumped into the street on a massive stereo system.  We were offered dinner, which Kate and I are pretty sure was dog.  We thought they said “duck” but it didn’t taste or look anything like duck.  It was spicy and done in a redang sauce.  I ate a bit but found our hosts tossing the chopped-up bones out of their served dishes, off the porch and into the gutter.  Kate and I quickly cottoned onto this and tossed the remainder of our meat out, bit by bit, and ate just the rice.  All eyes were upon us and we were reminded by Aristotle we were expected to be polite.


The song “Una Poloma Blanca” came on the karaoke at some point and hearing a recognized song (and a lot of gin and Kalweydos) encouraged me to dance.  The group thought this was a marvellous idea, so the song was set to infinitely repeat and we took to the street in front of our guest’s home.  Kate was dragged out of her chair by the army captain, but quickly got into the spirit of the song.  It rained, scooters and motorbikes came by to look at the tourists, we danced, we sang, we hugged and shook hands with everybody, and even our guest’s dad, who didn’t normally drink, joined us for gin and Kalweydos.  At some point, we were allowed to politely leave and Kate and I managed to make it back to Popeye without sinking the dinghy, drowning or losing our possessions in the bay.  I believe divine intervention and the dry bag were a big part of that, though.  Thus ended Day Two.

Tired and hung over, we awoke the next morning to calls from the stern of Popeye.


“Hello, Mr. Collin and Kate.  We have brought the head of the village to see your boat.  Can we come aboard?”

The next three days were filled with visitors to the boat.  We had some jobs to do.  We needed to refuel.  We needed to fix a leak in the dinghy that had happened when we left such an exotic dinghy on shore - an irresistible plaything to all the village children.  We wanted to hand-wash and dry some laundry.  We wanted to clean up the boat and prepare for the next big 24+ hour crossing to Saumlaki.  And still, the visiting canoes kept coming.  We did our best to be gracious, but I found myself getting quite perturbed at the constant stream of visitors and demands on our time.  By couldn’t they respect our private space?

My answer came on the last day.  One of our army visitors, who spoke very good English, mentioned that he never expected to be able to travel outside of Indonesia.  Their currency, th rupiah, was greatly devalued, making it completely out of reach of 99% of their population to go to any other country.  On top of that, Indonesians travelling abroad have to prove their wealth in order to not be at risk (to the country they visit) of staying as an economic refugee.  Our coming to their village could be the ONLY chance they would have to see what our lives held; see a real sailboat; practice English with a native English-speaker.  When we left, there was no way that they could follow.  Realizing this certainly humbled me.

Tomorrow, we are off to Saumlaki, last stop in Indonesian waters.  We meet Craig, owner of Popeye, and he will accompany us on the past big push to Thursday Island and Australia.


Imagine this for 30 hours.