As we get closer to checking out of Indonesia, I can’t help but be reflective of my time here.  We have had a chance to see a wide swath of the country, having literally sailed across is 3,000+ km breadth.  We have seen the tourist-y parts, the isolated parts, the more affluent parts and the poorer parts.  If I had to pick just a few words to summarize the country itself, this is what comes to mind. 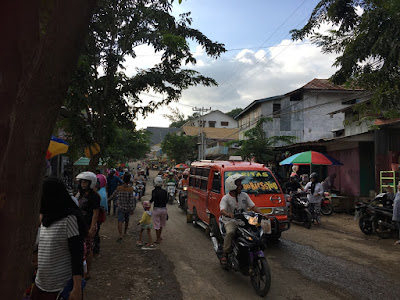 Noisy.  Being non-locals made us stand out and the locals weren't shy about calling out "Hello Mister" or "Hello Tourist" to us as we walked by.  Everything happens in the open - welders, carpenters and business owners would all be doing their thing in front of their shop where it would attract business and possibly be cooler.  Loud music was a way for warungs (small restaurants) to attract business, so they would blare Indonesian pop music until (often) 3 or 4 am.  Very few vehicles had mufflers - motorbikes, trucks, scooters, fishing boats ... all had their own distinctive sound.  Multiply that by how well sound carries over water.  Multiply that by the fact that curious fishermen would come within a car-length of our boat to have a look.  We were often woken up to the tak-tak-tak-tak of an ancient, unmuffled one cylinder, diesel boat engine so close you could smell the exhaust. 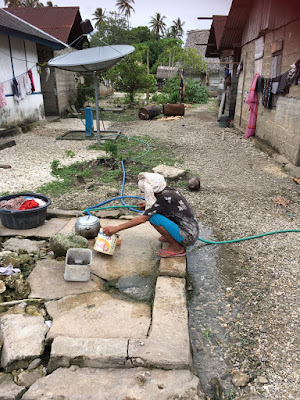 Homemade.  Very few things look like they were built somewhere else and imported.  All permanent fixtures (houses, buildings) seem unfinished and built with scrounged materials.  Bamboo and grass roofs are everywhere.  A ‘permanent’ structure will often have a corrugated tin roof.  Concrete (walls, bridges, jetties) are almost all crumbling and poorly formed.  Public things are barely maintained.  This could be due to the ever-looming treat of tsunami/volcano/earthquake/torential-rain-causing-mudslide.  Perhaps they don’t want to invest too much in building something that they will just be salvaging the usable bits from some time in the near future. 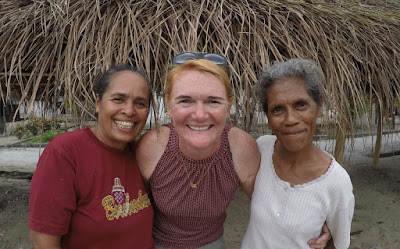 Non-threatening.  Some people expressed concern over us traveling in an area where pirates were known to operate, even though it has been generations since this has been a real problem.  The mostly-Muslim population has likely caused some to silently wonder if westerners are treated well and/or welcomed.  It is safe to say that we have NEVER experienced more welcoming situations - being invited into people’s homes, schools and their lives.  Coming from a privileged society, we are taught to be wary of those who want to take what we have.  Other than the occasional overzealous salesperson or bored fisherman, everyone just seemed interested in our differences and wanting nothing more than to share our time. 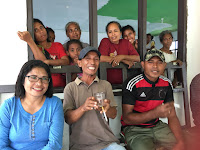 Casual.  Nothing seems to happen in a hurry.  I have rarely, if ever, seen anyone over the age of eight run for any reason.  Standing or sitting around is a national way of life, no matter if you are on your front porch after a hard day, on the street in town or being paid (by the dozens) in some shop.  There seems to be no stress about getting things done.  Oh, and you need to smoke while your staying still, too.
Isolated.  I can’t imagine how hard it is to get people, supplies, physical goods from one end of the country to the other.  The majority of the islands are volcanic and very, very rugged.  Some places only had electricity for a few hours a night.  Supplies might have to be brought by private boat for the entire village from another island seven or eight hours away.

Under-Educated.  Indonesia only mandates six years of free education for all children.  School after that is not mandatory and is out of reach financially for most citizens.  This doesn't mean that the under-educated have no future - it is just limited to staying likely within their area, almost certainly within their country and having a limited access to other religions and ways of life.   We met and spoke with some exceptions - they spoke English.  The majority will live subsistence lives and have to be OK with that.  Most are.

I'm very glad we are getting such a wide view of this interesting country that I really hadn't given much thought to, prior to our trip.