It would be a bit vain to say that Kate and I make our own luck, but we do say that the things we do make makes it easier for good fortune to find us.

Three years ago when we met a group of hikers at Assinaboine Lodge and offered to host them in Canmore for a few days, we thought that our adventure with them had run its course.  Little did we realize that we would stay in touch with them over the next few years, then have opportunity to stop into their farm in Pennsylvania on our Fall 2022 road trip.

We arrived last night, not really knowing what we were getting ourselves into as we allowed Google Maps to direct us to the address on Binkley Road that we had been given.  After driving from Niagara Falls, across the US border, through New York state and into the backroads of PA for a few hours, in the fading daylight we finally pulled into the driveway of a tidily-kept, two-story modern farmhouse.  There, we were greeted by a friendly Yellow Labrador named Winston, along with Dan, Joanna and their kids Grace and Kahleesi.  It was great to see Dan and Joanna again and we could tell the girls had heard about and were excited to meet us.  Although we had arrived late, we visited until we could not quite keep our eyes open, then all headed for bed with plans to all have some fun together for the next three days.

Dan and Joanna raise and home school their kids in much the same way as they have been raised.  They are across the road from Joanna's parents and within a five minute country-road walk of two of Joanna's sisters and one brother, Dan's parents and one of Dan's sisters and some of their other siblings who are still living at home.  These two families have created an ecosystem of inter-reliance that is truly wonderful to see.  They have regular weekly dinners together, help each other with work (one of Joanna's older brothers set up and runs a stable for boarding horses and employs or rents services to some of the other siblings) and co-exist across the acreages and homes in their quiet, almost-no-thru-road they all live on.

They have made Kate, Nancy and me feel welcome and just like family.  We are staying with them for three nights.

As we are now temporarily guest-free, it is time to reconnect with our fellow Canmorons.  We have added to our list of things to do and it is time to start crossing things off that list.
The Wishing Well - this funky art installation was originally located in northeast Calgary but stored away after the first few days of display (its amplified solar reflection was dangerous) then was relocated to a shadier spot in Bridgeland.  Finding it was part of the adventure, then hearing the otherworldly sounds inside the spheres added to the experience.  Because of its highly reflective surface, the observers become part of the display.

Sunshine Meadows - although we have been before, purchasing a summer pass to the gondola means that we can use Sunshine Village as a 2300 metre-high starting point for a number of interesting hikes.  We have found a few ways down through Simpson Pass got to enjoy trail running along Healy Creek.  One spot on the run is past a rubble field that has a few resident marmots.  I love marmots.
Posted by Sean at 9:12 PM No comments:

Driving up Highway 1A to go hiking with friends, we came across two cars stopped in the middle of the road. We stopped behind them scanning the verges and bushes for animals as animal sightings are the usual reason cars stop in the middle of the road.
And there, lumbering through the flowers and brush was the biggest grizzly I've ever seen.  And not just any grizzly but the infamous Bear #136 - Split Lip.  Instantly recognizable by the large scar, Split Lip is one of the two dominant male grizzlies in The Valley. He is about 18 years-old and enormous. It was such a privilege to see him up close - and from our car rather than from the saddle of a bike!
He was in his element, completely comfortable and literally at home.  The fact that the road cut through his domain seemed irrelevant to him.  Rather than try to capture the essence of the moment with a camera, we both immersed ourselves in the experience of seeing this majestic, huge animal lumber through the grass and dandelions beside the road.
Posted by Kate at 7:50 PM No comments:

Sometimes when we challenge people to "try and find us," they are successful!

After returning from France, we had a few weeks to reacquaint ourselves with Canmore, settle into our lives ... and ready the guest rooms!  Florence and Lou had made plans to come to Canada (for Lou's FIRST trip away from Europe) at the end of her school year.  We couldn't wait to show them around the Rocky Mountains.

The day after picking Florence and Lou up from the Calgary Airport and giving them a night's rest, the Canadian Experience began.  They met the Pettigrew family, bringing together two important parts of our world.   Megan, Ali and Lou got along famously, as did the rest of us.  Having the girls together helped Lou's already-excellent English get even better.  Along with the expected Canmore activities, we also made a trip into Calgary and to the Royal Tyrrell Dinosaur Museum in Drumheller.  So much fun!

What sort of Rocky Mountain tour guides would we be if we didn't include some hiking and animal spotting in our Canadian Experience?  We managed to produce elk, deer, marmots, ground squirrels, rocky mountain sheep and even a baby black bear ... asleep in the ditch!

It wasn't all fun and games, though.  Kate volunteers with Community Cruisers and ensures that the Bike Parking service at the Thursday Farmers' Market is properly staffed.  With two able-and-willing new French recruits, it was an easy task during their stay.  Doing the bike parking really isn't arduous.  In fact, it is very social and the day goes by quickly ... even when the weather is a bit glum!

One of the adventure-within-an-adventure was a day of canoeing on Vermillion Lakes.  Starting from Banff, we paddled up Ten Mile Creek, portaged across a beaver dam and paddled across the first two lakes.  There were plenty of water fowl amoungst the reeds in the wetlands.  The weather co-operated as well and we had picture-perfect blue skies.

Cycling was a big part of the trip, too.  We find that you can cover so much terrain by bicycle without losing touch with being in the environment.  It's our preferred method of getting around the Bow Valley - summer or winter.  Lou and Florence took to velos as we readily as we do (in fact, we wouldn't be surprised to hear of Lou attempting some bigger rides when she gets back to France).  We used bikes to sightsee, get to picnic sites and from town to town. 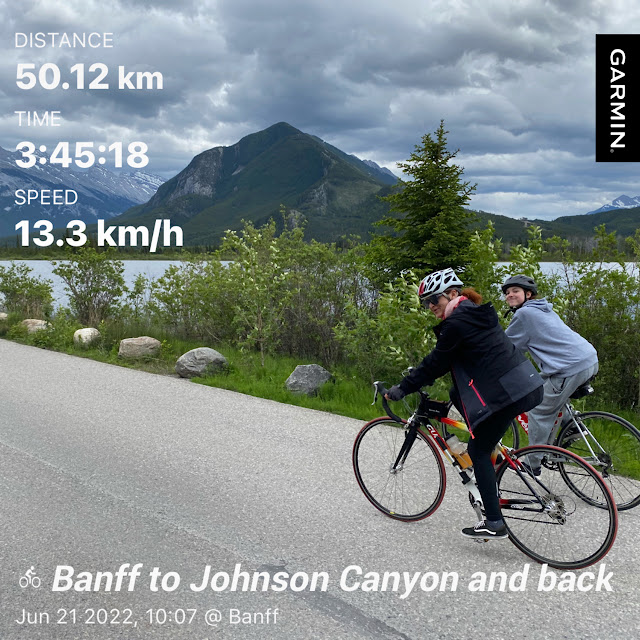 One of the disadvantages of our trip to France in April was that we missed the end of the ski season at Sunshine Village ... or so we thought.

The 2021-22 season had been soooo good that even though most of the resort staff had finished working at the end of May, the awesome snowpack had refused to melt.  That meant that for the first time in thirty-five years, Sunshine was able to open for a week of summer skiing across both Florence's birthday (June 29) and Canada Day (July 1st).  To beat the inevitable mobs that would ascend the hill on July 1st, we celebrated Flo's birthday by whooshing down the cornsnow.  Most of the runs were closed, but a sizeable swath from the top of the Strawberry chair to the Village base were open.  We spent the whole day riding the boards.

We did firepits, time at the Calgary Stampede (and parade), a drive north on the Icefield Parkway, and usually finished off with lounging on the deck at Chateau Collins.  At the end of their trip, we returned them to the airport with a wider understanding of what Kate and Sean are up to when they are not in the serene settings of Alsace.  I'm sure they had fun and don't think they have seen the last of the Rocky Mountains!

On each visit I made, we would flip through the real estate listings - no garden, too dilapidated, not in the right village, too big, too expensive...  And this trip was no exception.  My house searches were met with 'it is rubbish', 'out of my budget' and other such encouraging phrases.

That was until I found a listing for a very cute house somewhere in Obernai. Without wanting to call the agent, we decided to spend the day exploring Obernai on our bikes to see if we could find it. Our methodology? Stick to the old part of town and turn left, turn left, turn left!  We meandered down narrow lanes, dead ends, through archways and along the Ramparts.  And remarkably, there it was!  The à vendre sign still up, tucked away in a narrow lane just a hop, skip and jump from the centre of town! 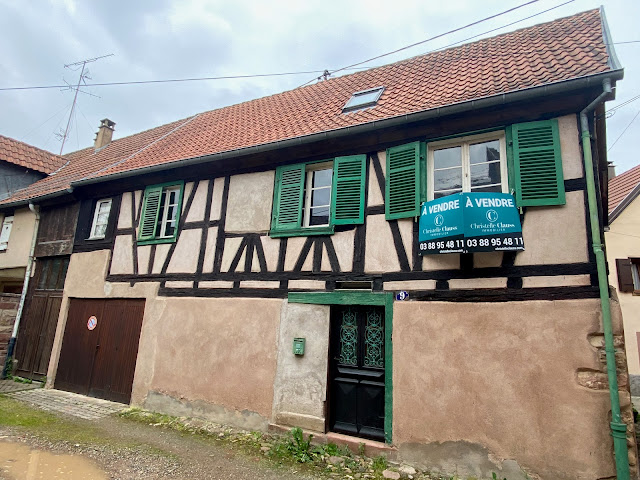 Perfectly located, this 200 (ish) year-old house looked in reasonable shape.  The roof wasn't caving in, the walls looked solid and, best of all, the price was right!  Flo rang the realtor and we toured the house. It was in need of a full gut job, but oh, those lovely bones! With vision, some hard work and a bit of cash, could this be the dream, could this be the old Alsatian house?
Phone calls to realtors, bankers, friends who have renovated, trades persons who specialize in Alsatian houses, plumbers, builders... an offer was made, an offer was accepted.
OMG Florence, what have you done?

In the high mountain pastures of the Vosges above the town of Munster, there is a tradition of cattle grazing and cheese making.  On these high, steep pastures, the cows would graze on the lush grass, they would be milked and the cheese immediately processed and ripened. This was done in a marcairie. The macairie comprises of two buildings. One where the milking and cheese processing was done with a space for the storage of the ripening cheese, and one smaller cottage for the farmer to live.

While the tradition of Munster cheese continues, the old macairies are being converted into mountain weekenders.  With huge thanks to Marie-Claude and Hervé, we stayed for the weekend at their beautifully restored marcairie 'Kaltwasser', high above Munster. 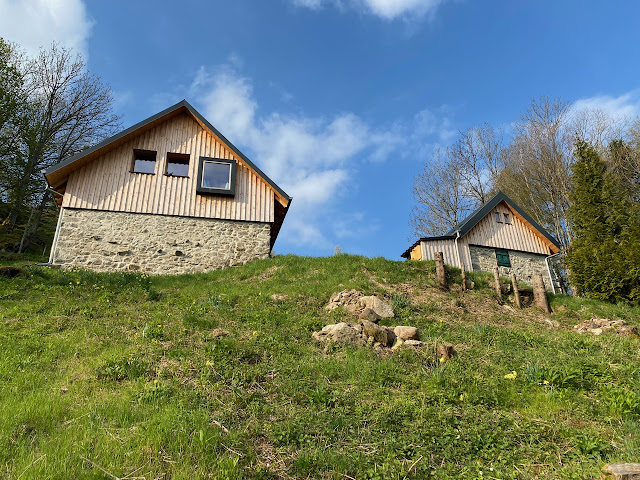 The tiny cabins are wonderfully renovated into cosy accommodation, off the grid with solar power, a natural spring for water and no phone coverage.  It's a perfect place to relax. Access is via a narrow, winding mountain road. When this became impassable to the valiant Saxo, we hiked up the last four kilometres lugging our wine and food on our backs.

Kaltwasser is a wonderful base from which to explore the hiking trails of Petit Ballon, the highest peak of the area.  We snugged up in front of the wood stove watching the rain, hiked over the spongy trails enjoying the breathtaking views and, being France, drank and ate and drank.