We are back in Canada, settled into quarantine in a hotel near the Calgary airport after our Australian sojourn, 1,200 kilometres from the nearest open water … and we’re thinking about a sailboat.

A sailboat was bound to factor into our future.  After our adventure of bringing Popeye from Thailand to Hamilton Island, we knew that we could handle actually living aboard a 40+ foot yacht for extended periods of time. We had offers to crew on other yachts or even to borrow Popeye when we were in Pittwater, but cruising on someone else’s schedule and route doesn’t afford the same feeling of freedom that having our own boat would. As much as we love our place in Canmore, we keep running into people who give us great ideas for places to go, sights to see, experiences to have ...

When COVID closed down everyone’s access to travel, Kate and I turned to vicariously exploring far away places via ‘blogs and YouTube. Originally, I began watching a young couple who were renovating an abandoned sailboat in Brasil with plans to sail it to far away places. I found a Swedish couple who had been around the northern hemisphere and were now poking around the islands and fjords of Sweden and Norway. There was a couple from Australia who travelled to the ‘States and bought a Tayana 42 and were making their way through the Caribbean Islands. A brother and his friends had sailed to Greenland and then transited the Northwest Passage. Another couple was in Tonga and exploring the South Pacific islands on a catamaran. Seeing all these far-away places, jaw-dropping scenery and magical experiences fueled our desires and spurred us into action.

For a pair of planners, “action” starts with making lists. Where did we want to go? Norway, Sweden, the canals of western Europe, the Mediterranean coast of France and Italy, Croatia, the Greek Islands, Morocco, the Strait of Gibraltar, the Shetlands, the Caribbean, Coco Keeling, go through the Panama Canal, the west coast of Canada, the Aleutians, the South Pacific Islands (Tonga, Fiji, Tahiti, New Caledonia, Micronesia, Samoa, Vanuatu), New Zealand and (of course) back to visit Australia. This was a whole lot of sailing - by our calculations, at least ten years worth. If this was what we intended to do, we had best get to work finding a boat. But which boat?

At the time this post was typed, yachtworld.com has 12,834 sailing vessels available that you can buy … and that is just in the second-hand market. We needed to have some criteria to narrow down what would be the right tool for the job. Here’s our “must-have” list:


Of course, whatever boat we chose needed to leave no doubts that we would be safe.

And so with these criteria, we began to search in earnest.

There are many ‘blogs and electronic founts of knowledge with regards to bluewater cruising yachts (which is the class of boat we have described) – not to mention a cornucopia of books to pour over. Yachtworld.com was a place to search out pictures and details of specific vessels we found mentioned. We decided to dismiss custom “one-off” vessels, as the build quality and sea-worthiness would be very hard to assess between individual boats. We were also looking ahead to an exit of our adventure, when we would need to pass on or dispose of the yacht when we no longer needed it. Having a boat of a well-known type meant that it would not take years to sell – perhaps just weeks or months. Also, going with a production or semi-production boat meant that we could glean the experience of boat owners on what they cherished or wished they could change about their own boats of the same design.

During our wanderings across the interwebs, we saw some videos posted by a couple who were just beginning their sailing adventure. They had recently retired and (after much research) had ordered, customized and purchased a type of boat called a Garcia Exploration 45. Both working in jobs that were highly methodical (he a scientist; she an inventory manager – both civilians working with the Australian military), they were list-makers and researchers. It took them two years to finalize the yacht fit-out specifications.

Having recently come to Cherbourg, France to take possession of their new vessel, Rick and Carolyn wanted to give a bit back to the yacht-browsing community that they had spent so much time being part of. They were making small videos about the details of their new boat and were posting them on YouTube. They included what they liked (lots) and didn’t like (not much) about their boat, and would often bring out the tape measure during their videos to quantify sizes of lockers, cupboards and hatches.  They also filmed each other doing some of the ordinary tasks onboard, which we found especially informative.

We had heard of these Exploration 45s before as many considered them to be an exceptionally well-built and well-thought-out yacht. The advertising videos and reviews all heralded the attention to detail fundamentally good design elements that these boats were comprised of. Although there were some reviews to look at, this couple were living aboard and currently critiquing a boat that was one of the top of our list, so I wrote them an e-mail asking if they would be willing to do some on-on-one video chatting about their purchase process and their specific boat. They responded that they would be thrilled to do so. 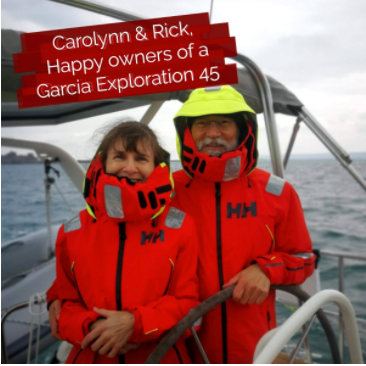 Rick and Carolyn turned out to be accommodating, helpful and just lovely people. They talked us through how they chose this brand and type of boat, the purchase process, the design process, the education and sea trials they were going through right now and their plans for the future. They also kindly answered ALL our questions with great and helpful detail and offered to answer any further questions or queries we might have. We hope that sometime during our own adventure that we can spend some time in their actual company.

The more research we did, the more the Exploration 45 stood out from the other models in the “expedition” and “blue water” class of boats. It had the aluminium hull for sturdiness. It had fuel, water and provision storage capacity. It was luxurious. It was extremely well thought out. It had been designed by a team that included a world-renowned blue water cruiser named Jimmy Cornell (who had sailed over 300,000 nautical miles) and shipwrights who had been designing and building blue water sailing vessels since the 1970’s. Best of all, it looked very, very swish. However, being a highly regarded and hand-built boat, there were very few built every year – numbering only 34 builds so far.

With time to deliberate, we poured over our choices. We got to meet the owner of a Boreal 47 and tour his boat in Vancouver and quickly dismissed it for its design and appointments. Yachtworld became a regular check in Sean’s internet rounds. Any opportunity to talk with someone who had done blue water cruising was happily followed. Must-have and nice-to-have lists were revised every few weeks. Yacht brokers were contacted in British Columbia and Seattle with instructions to get back to us if a suitable boat became available. We were still at least a year away from wanting to take possession, but we didn’t want to miss an opportunity.

One of the other variables we struggled with was: Used or New? Both had their pros and cons. One of the major disadvantages of a used boat was the lack of availability of what we wanted. The more deliberation that we did, the harder it became to consider anything except a Garcia Exploration 45.   As part of the many irons in the fire, Sean had been corresponding with Cyrille, the Garcia salesperson in France. Kate and Sean had video called him and talked through the process of placing an order for a new boat (if it came to that). We heard that the wait list had now extended to over 24 months from receipt of a deposit to start of the build, and the build would take 9 months beyond that. Sales had been brisk and the wait time steadily increasing over the past year.

Going sailing has been Kate's dream forever and it was one of the drivers that lead us to retire early. We found the boat that ticked the vast majority of our boxes but COVID restrictions prevented us from going to France and meeting with the builders and sailing the boat.  Chatting with Gabby, she encouraged us to take the plunge -  “You obviously like this boat and you can afford it. What else are you going to spend it on?” What indeed!

An e-mail was sent.

A bank transfer was arranged.

A confirmation of receipt was received.

Although we have arranged to purchase the base model, we have yet to determine all the options on our boat. We have until August 2023 to finalize how the yacht will be appointed. Sailing on a few Exploration 45s, talking to other owners and attending boat shows will help us decide on what we like and don’t like.

We are SO excited.