This is not The Whitsundays at their sparkling best!  As predicted, the wind has swung around to the southeast and in true trade wind style, is blowing 20+ knots.  The wind has brought with it smoke from the bush fires further south and we are blanketed in a pinky-hued smog.

We are so pleased to be snug on a mooring and not bashing into it!  We are having a recovery day - stowing the race gear to turn Popeye back into a cruising boat, cleaning, cooking and reading while the wind whistles and the boat bounces on the mooring.  We are chasing down all the noises, squeaks and rattles that disturb the ambiance by tightening halyards, lashing lines and liberally spraying WD40.

And…  Sean has mastered the art of sourdough á la Popeye! 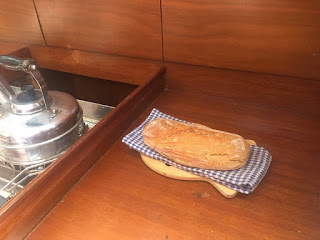 Last time we headed south through these waters, we were bashing into 20-30kn Trade Winds that kicked up the seas to a sporty 2.5m.  Popeye fell off waves, her flat bottom slapping and jarring our bodies and souls.  Our progress was a slow 4kn, it was night and our journey seemed endless.

Today we are skipping along on a flat, sparkling, turquoise sea under a cloudless blue sky.  We have 1-2 knots of wind gusting to a mighty 4 knots.  There are whales spouting and breaching in the distance and flying fish skimming across the water.   Other than having to motor, it is idyllic. 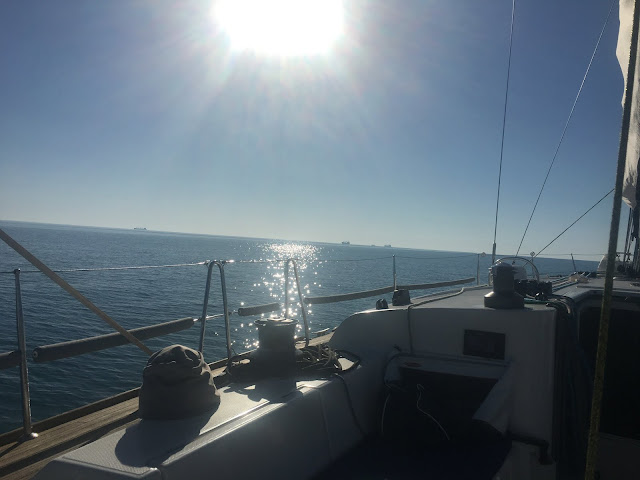 Oh may the winds always be fair – and in the right direction!

Off the coast of Townsville in Far North Queensland, Magnetic Island is so called because of a magnetic anomaly in his compass as Captain Cook sailed by.  It has quaintness, charm and retains that backpacker feel that is lacking in some of the more southerly islands where tourism is sleek and shiny.

We rented a house that was an oasis.  A swimming pool tucked away in a gorgeous tropical setting.  Big sliding doors, open decks and even an open bathroom looking over rainforest and the pool.

Race Week is a big deal on the island with 75 yachts competing, many having come from as far away as Melbourne. Despite the light winds, it is a beautiful place to sail.  Popeye, with all her 13 tonnes of French furniture, came second in our division and picked up four of five line honour guns.  The usual regatta parties went on each night and a picnic on the beach on lay day.
Great racing but much more laid back than Hamo.  We will be back!