Storytelling is an artform I've always wished I was better at. 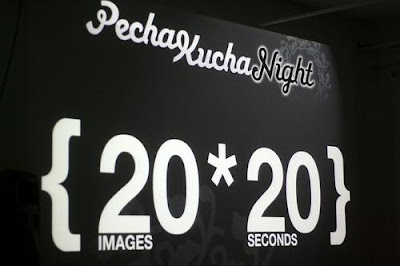 We have just returned from Pecha Kucha Night at Artspace and I have been dazzled by the stories I've just heard.  Pecha Kucha is a form of storytelling where you have twenty photos (or slides) that you use as visual aids.  Each slide is presented for twenty seconds, one after the other, and you have to speak to the group as they appear.  You can't pause the forward march of the pictures, nor can you jump ahead to the next one if you can't speak to one for the full twenty seconds.  At a Pecha Kucha event, there are usually six to eight presenters and they have all been given a theme to present on.

Tonight's theme was "What If ...".  One of the tales was from a woman in her mid-twenties who had been abruptly dumped out of a relationship in which her partner had convinced her to move to Canmore with him, even though she knew no one in the town or what she was going to do for employment.  When the relationship ended, she decided that she was still going to move there.  What If she hadn't?

Another presentation was entitled, "What If Olive Could Talk?" and was given by a burly, gruff-looking bearded man.  Olive was his dog, whom he credits with rescueing him from depression and the talk documents how Olive watched him struggle with mental illness and eventually helped him bring it under control ... to the point where the two of them are now happy members of the Canmore community.

Another tale was of a woman who lost a child to kidney disease and found she could help others (and herself) in the grieving process by using her skills as a photographer to document the time spent in pallative care by capturing images of the family while there.  These were all very personal stories and quite touching.

I hope someday to have the skills (and the courage) to present at one of these events myself.
Posted by Sean at 9:19 PM No comments: