Our nephew Sam is an agronomist working on the Darling Downs based in Dalby, a three hour drive from Palmwoods. A road trip was obviously required!

We piled into the Pajaro and headed west over the Great Divide through tropical rainforest, pastoral lands and crops of sorghum and mung beans. Chicken Parma at the local pub, a good night's sleep then off to explore the Bunya Mountains. The National Park includes the most westerly tropical rainforest in Queensland and the world's largest population of bunya pines. (Since bunya pines are endemic to South-East Queensland, this claim is not quite as impressive as it sounds!!)

It is stunning. A few degrees cooler than down on the plain making hiking very pleasant. We wandered through the towering bunya and hoop pines, marvelled at the 400-year-old strangler figs and were awed by the views. There are many hiking trail options, a quaint little Sunday market and any number of weekend houses to rent.

You need a pretty special beach to impress an Australian.

We are visiting Wendy and Graeme who live in Palmwoods, Queensland - near some of the more spectacular beaches in the world.  Hundreds of kilometers of tan-coloured sand awaits, every afternoon, every weekend, every holiday.  So, where do they go when they have guests from the other regions and they really want to impress?

They head here - Double Island Point.  The only way to get here is to:

As we made our way to our eventual picnic spot, we zoomed along an east-facing beach, exposed to the full effect of the winds on the Pacific Ocean.  Waves would roll in, churning up sand as they have done for tens of thousands of years.  This beach and several kilometres behind it are mostly sand that is anchored in place by trees and hardy grasses.  Some of the dunes overlooking the beach are 80 - 90 metres high.  When an area gets exposed by erosion, it can make for an exhausting climb, but an exhilarating almost-freefall trip down.  We stopped and had a play at one of these erosion points - what fun!

We reached our picnic spot on a northwest (and protected) section of the Northshore.  Here, gentle waves lapped the sandy bay, left exposed by the low tide.  Deep tidal pools had fish (big and small) and other sea life in and around, including thousands of soldier crabs.  We parked our vehicles, dropped our tailgates and rotated between lunch, sunning ourselves and cooling off in the bathtub-temperature waters.  Beach chairs, eskies and shade awnings added the creature comforts that made us want to stay all day.  There were a few other locals at the kilometre-long bay, but we weren't in each others' way.

When the shadows began to lengthen and the tide began to come in, we had to make our way back while there was still some beach to drive on. 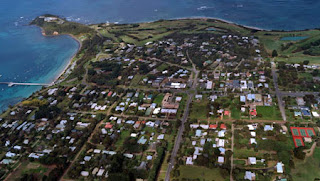 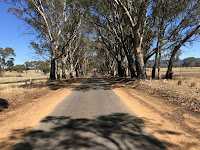 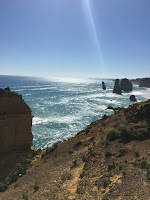 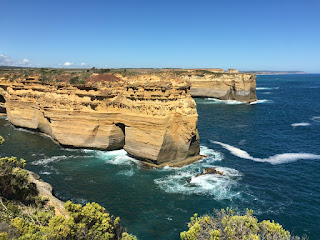