With jet lag mostly conquered, we decided to get a broader view of the city by taking one of the "hop-on, hop-off" bus tours that circumnavigates the city.  Some intrepid travellers poo-poo these tourist-focused outfits.  I find that:

We now know where the New Mosque (built 1589) is relative to the others; where the Galata Tower is (and better ways to see the views of the Bosphorus Strait); that there is a good-sized portion of this 4000+ year-old city that wasn't settled until about 100 years ago; why seeing the sea wall facing the Marmara Sea is better experienced on foot. 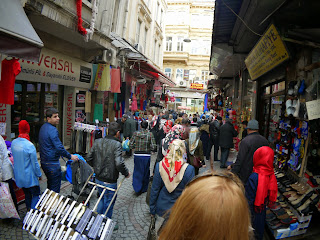 As we are walking through the bustling streets, I am seeing so many of the shopkeepers standing outside their places of business, patiently waiting for customers, smoking, mesmerized by mobile phones (or a combination of the three).  They seem to have the wisdom that hurrying just brings heart attacks. They are patient with a truck driver that stops in the middle of traffic, window rolled down, to have a word or two with a friend that is cutting across the road.  The men's clothing has a rumpled formality to it as well, with dark colours on everyone except the tourists.  Smoking is widespread here, but for some reason, I'm not offended by it.  The empty buildings that are unabashedly visible don't seem derelict but instead waiting for the next refitting/century/empire.  The city knows it will exist and will tolerate the religions, ethnicities and cultures that are here until the next ones come along.  No single structure or detail of the city seems as important as the antiquity of this place. 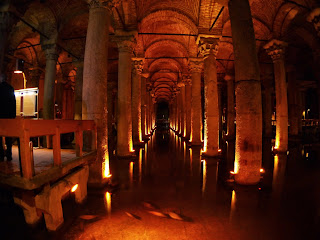 Staying in the Old City was a good idea.  We are close to many of the things worth seeing - the Blue Mosque; the Aya Sophia; Gülhane Park; the Golden Horn; the Basilica Cistern.

Today is "get on a bus and start towards Galipoli" day.  We need to provision-up for what will likely be a day of long bus rides (6 hours each way), security checks, waiting for security checks and waiting for everyone behind you to clear the security check so we can all get to the next security check.  Kate will be amoungst her countrymen, so I'm sure entertainment will be provided.  As much as it will be tedious getting to it, I'm looking forward to the impact of the actual event (guaranteed to be moving).  We will be up all night to be in place (on the actual battle sight), so I'm sure that tomorrow, we will all need a good afternoon nap.