Those of you who have ever been to the Banff Film Festival with me will know I am not good with caves. Or spelunking. And certainly not diving in caves. So imagine my horror to find our morning dive was a cave dive. Not a swim-through where you can see light at the end but a full-on cave.

Well beyond my comfort zone, we entered from the zodiac, Seahorse B, and descended to about 18m. And there was a tiny, little tunnel about 3m wide and 1.5m high that we were supposed to wiggle into with scuba tanks. It was dark with our torches throwing pathetically small beams into the dimness.  After about 4 metres, the tunnel widen into a small cave. Multitudes of tiny red eyes peered out at us from between the rocks. Their owners, little red shrimp! 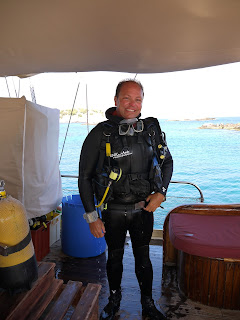 We then came to a narrow chimney and 10 metres above was a glorious disc of blue water. The temptation was to shoot straight up but I resisted - perhaps only by Mehmet's firm grip on my arm! As we slowly floated up, little red eyes peered out and we suddenly broke out into the safety of blue water through a school of fish.

With the little air I had left, we followed a high wall covered in soft corals and the odd anemone. Seahorse B was there to pluck us from the sea when we surfaced.

I lived. I enjoyed it but do not get any ideas about taking me spelunking!
Posted by Sean at 11:29 PM