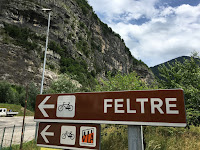 After having an extended visit to Switzerland, you do not notice leaving the country as much as you notice entering someplace else.  The metaphoric handrail that would magically be present in the correct spot when you happen to slightly come off your balance ... was suddenly and noticably absent. The asphalt on the roads was a little bit rougher and in worse repair.  The traffic seemed to whiz by just that little bit closer.  The houses seemed less carefully finished and more in need of a good scrub.  However, we are paying 1/3 the price for just about everything, so we are happy to be here. 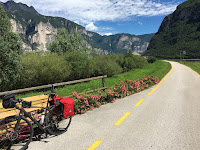 Our multi-day ride from Stelvio to Feltre was a lazy cyclist's dream - gentle, undulating downhills (less than 300m elevation gain!) through valley bottoms. We were lucky to have neutral or tailwinds most of the time.  The route we had taken up is part of the Via Claudia Augusta, an ancient Roman road that links the german valley of the Po River to Rome.  We now know that the cycling pathway from Merano (where we stayed a night) to Trento (and south to Verona) is an increasingly popular outing for Europe's Active Seniors.  Scores of old folk's homes had emptied out onto motor-assisted e-bikes ahead of us.  We dodged and weaved our way around them, reveling in the unfamiliar happy songs our leg muscles sang to us.  Gord requested a stop at a castle that was home to a famous moutaineer and adventurer.  We wound our way, by shuttle bus (you're welcome, legs), up the slope of the valley to a meticulously-restored castle/loot-storage-chamber of Reinhold Messners.  It was filled with lots of lovely things but the real treat was the marvelous views along the valley it afforded.

The cycle route is gorgeous. Well maintained, rest stops with roses, benches and bike stands and outdoor cafes where you can stop for a beer. All very civilized. But do we get to continue along this pleasant way to Verona? Oh, no, at Trento, we turn left, up over a mountain pass to Caldonazzo!

We left behind the grey-haired cycling tours and saw only the lean, lycra'ed set on expensive racing bikes. Obviously back in the more hardcore cycling scene.

We landed in Miane - bang in the middle of Strada del Prosecco e Vini dei Colli Conegliane Valdobbiadene - or Prosecco country! It is a beautiful region with vines everywhere, even on the slopes the goats would have a tough time negotiating.  We had a rest day and some non-saddle time in a quiet pensione - or so we intended.  The region was hosting a car rally so our ambiance was shattered every few minutes by the roar and back-firing of a rally car.

Instead of remaining at our quiet, out-of-town pensione for the gran fondo, it was decided that we should be staying close to the starting point of the event ... especially considering the 7 am start time and the 55 minute drive and bike-assembly that would have to occur before said start time.  A new AirBnB option had appeared and we snapped it up - even at its premium price.  The accomodation was lovely even though it wasn't very well laid out.  It was in the heart of old Feltre - right where we wanted to be. The ride to Feltre was gorgeous under the bluest of skies. Feltre was filled with cyclists and all the posturing that goes along with it; Shaved legs, fancy kits and even fancier bikes. Groups of skinny, fit young things in matching team outfits swaggered along the streets.  We stripped our bikes of any unneccessary weight and mentally prepared ourselves for the gran fondo. 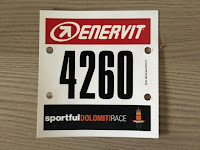 The next morning, we made our way to the very back of the 4,500-rider-strong peloton.  The festival atmosphere was all around us - many nervous riders ("this was supposed to be just a fun ride - why does everyone look so competitive?"), blaring "Rocky Balboa"music, many very expensive bikes and an announcer who was belt on revving up all the participants-cum-competitors. When the countdown began and the cyclists all started to inch forward ("Hey, I thought we weren't racing!") and then an echoing pistol shot was heard, the result was ... less than exciting.  4,500 cyclists is a fair number to move through a ten metre wide starting gate.  Being at the back of the throng, it took us a good ten minutes of slowly inching foward over the cobblestones, barely at pedalling speed, to the exit the old town.  It was cool riding through the city gate and out towards the waiting countryside ... and 2,700 metres of climbing we had to get through.

We quickly fell towards the back of the group (we were on sport touring bikes rather than fancy racing bikes - rather like a VW Golf compares to a Ferrari) and enjoyed the quiet and lack of fanfare that came with it.  We saw some other riders, both faster and slower,  The first climb was not too steep but unrelenting which made it tough.  The second, taking us 2,100 metres total for the day, seemed to slow us down even more.  Just as we summited the second climb, the heavens suddenly opened delivering torrents of rain and a howling headwind.  We started the descent but it was bitterly cold, The broom wagon had been only a bit behind us (we had seen it on the switchbacks below), so rather than risk hyperthermia, we decided to take up the offer of a warm ride and make our way to the finish line in comfort.

Once back in Feltre, we met up with Gord and Jenny, who had finished the event under their own power.  Next, we pack up our bikes for travel on the Italian train system and make our way to Venice for one last day of site-seeing. 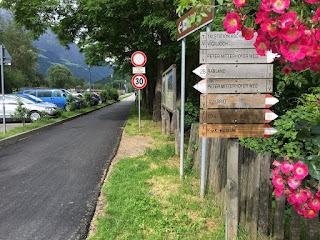