With kids around, the passing of time is much more obvious.

A week ago, we landed in Bischoffsheim at the home of with our friend, Florence, and her not-so-little-anymore kids, Thibaud and Lou.  Thibaud is a year away from finishing his studies at a communications and media college, and Lou is in her tenth year of Lyceé.  They've both transformed greatly from the original waist-high French waifs that Sean met on his first visit in 2015. 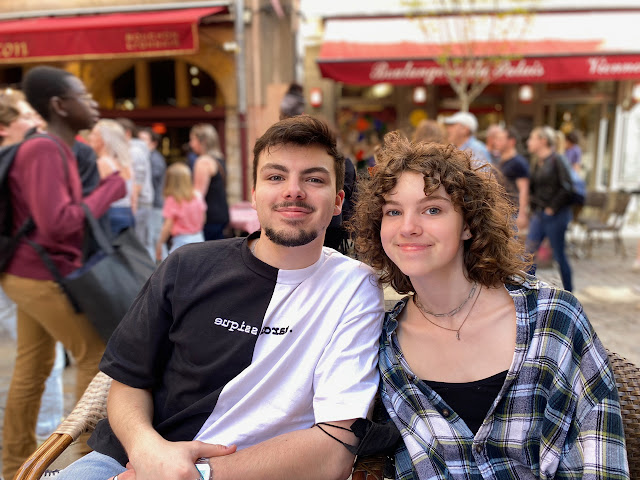 While we are alllllll the way over in France looking at boats, we thought Florence would enjoy a visit from us.  When we come, we don't come for the weekend - we are planning to be here at least a month.  As we were with them for such a long time, we encouraged them to do as they normally do, and we would see them between work, school, scheduled activities and time with friends.  The Theron-Bouvier family decided to treat us as part of the mob and we were to be included in all their extracurricular fun.  They had planned a get-together in the Beaujolais region with old friends from Florence's home town.  We were invited, so of course we came along.

When Florence's red Megane station wagon succumbed to fatal engine trouble a few years ago, an uncle offered to sell his car to her.  As it was just Florence, tiny little Lou and a-bit-bigger Thibaud (who was away at school and no longer in need of daily rides), she pronounced the 2001 Citroen Saxo a perfect car for her.  A small diesel engine meant reliability and good fuel economy, and a small wheelbase would be handy on the narrow roads and small spaces of the region where she drove.  Little did she realize at the time that in a few years she would be loading her family, bedding, food for the weekend, two old friends with long legs, her VERY TALL teenagers and enough wine to see us through a long Easter weekend into this wee workhorse for a six-hour drive to Vaux-en-Beaujolais.

A six hour drive from Bischoffsheim took us as far as Lyon, where we took the afternoon to look around (Sean had never been).  We sent a few hours tromping through the old city and across to La Basilique Notre Dame de Fourviére.


We arrived in Le Perréon in Vaux-en-Beaujolais on Friday night to discover that we were staying at a scenic and grand Gîte Mairie Le Perréon, opposite the church/town centre.  There were flags and bunting criss-crossing the main street -  this weekend was host to the Fête du Conscrit!

Originally a chance for one last kick-up of the heels before the young men of the town did their obligatory military service, Fête du Conscrit had morphed into a evening (which flowed into the whole weekend) of a parade around the town themed around colours.  There were floats themed in yellow, orange, blue, black, purple and finally a multicoloured float.  Each float had an oversized music system blaring the theme song of their "colour." The float was festooned with local rowdies who had concocted a mixed drink that they encouraged the adults in the crowd to imbibe and had bonbons to give out to (and confetti throw at) those that chose not to drink.  Add to that liberal use of firecrackers and actual fireworks - launched from and around the floats - and you've got a recipe for a party.

We had our own celebration going on, as group after group arrived at the gîte and were properly welcomed by those already there.  A large table of aperitifs had been prepared and bottles of wine were quickly produced out of the arriving luggage.

Outside, the parade continued.  What we thought was a parade running from one end of the tiny village to the other turned out to be a loop ... right around the block where our Gîte was.  'Round and 'round it went, into the night.  After much merriment, music, young hoons revving their engines and just when you thought things were calming down ... CRACK CRACK of some previously-unexploded ordinance ... we managed to get to sleep.  Lucky thing, as a vineyard tour and hike had been planned for the next day.

Organizing this many people takes time.  After getting everyone up, organized and fed (lunch, by this time), we were only able to do the vineyard tour.  The hike would have to wait until tomorrow.  As all the old friends had booked out the Gîte in Le Perréon, Kate and Sean relocated down the road to their own gîte.

The next day, we reconvened at the Mairie, had breakfast and started off on our hike.  Every time we reached a crossroads, an ad hoc committee was formed to decide which way to go.  The consensus was usually "up."


Each evening, everyone would gather for a communal dinner that went on for hours.  Kate and Sean didn't always follow the fast, accented conversation amongst this close-knit group that had known each other since before they had had and raised their children, but we could see that this annual reunion had been sorely missed during the last two years of COVID.  We felt privileged to be part of the fun, good-natured jokes and camaraderie that bubbled forth.