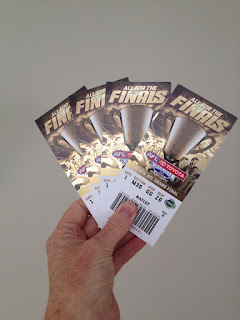 Thanks to the Winnekes for generously providing the tickets, we found ourselves at the Grand Final - Hawthorn versus West Coast! As we were presented with four tickets, our nephews Tom and Angus got to come along too - providing, of course, they supported Hawthorn.  A first Grand Final for them both - and Uncle Sean too!!

I have been a Hawks supporter since, as a tot, my mother convinced me that brown and yellow was indeed a fashion statement. Far more glamorous than the option of my Dad's team, who sport black and white.  So it was very exciting to be going to watch The Mighty Hawks in their fourth straight Grand Final.

Sean supports the North Melbourne Kangaroos after a rather surprising incident for both Sean and the kangaroo during his first trip to Austrlia. He saw this as a sign and has been sporting the blue and white ever since.  Unfortunately, North was defeated the week before by West Coast during the Preliminary finals. But as North had finished eighth after the home and away season, and West Coast second, we thought we were in for a better game of footy.

The Mighty Hawks totally outclassed West Coast. The first quarter resembled a footy game but the last bordered on a joke. The Hawks looked like they were playing the local Thorpdale team. So, the Mighty Hawks went on to win their third premiership in three years. 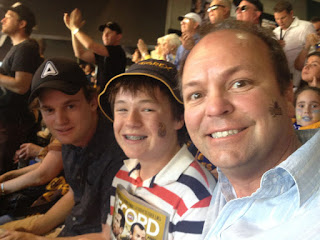 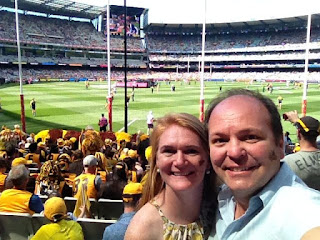