After such a fabulous evening with the Running’s crew, we were quite sad to head off in different directions (we were even sadder when Cool Runnings emailed us to say they had met up with Eric and Brigitta on Ariel IV and were timing their departures to leave for Africa together!).

We bashed our way into a big swell, stayed well clear of Kroko Atoll and entered to Boling Strait.  We have deliberately stayed to the north of islands as we have worked our way across from Bali so this was our first real taste of the Indonesian Throughflow. 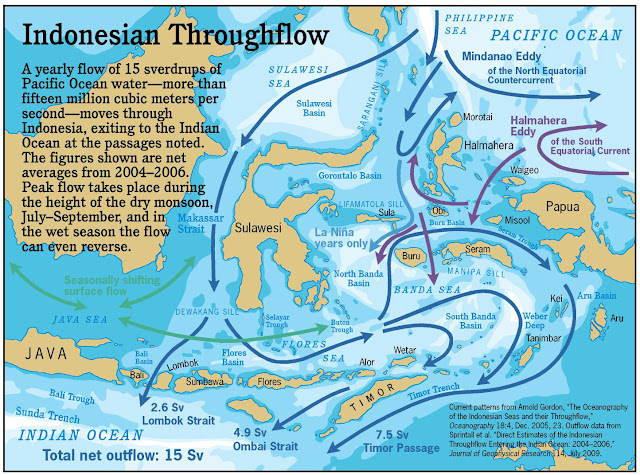 We found ourselves screaming down at 10.5 kn, which meant we were helped along by at least 4 kn of current. And this strait is one of the mild ones! We rounded the headland and bashed across the shallow Leba Leba Bay into a head wind. Tucking inside Awalolong Reef, we anchored under two smoking volcanoes. One in the east to complement our sunrises and one to the west for the sunset!

A beautifully calm anchorage at night, a gentle breeze and the southern stars sparkling overhead, so we slept on deck. In describing Indonesia, Sean uses the adjective “homemade”; I would use “noisy”. Be it the wonderfully melodic call-to-prayer, the fishing boats/motorbikes/cars that defy the concept of a muffler, the national obsession for karaoke, the roosters crowing, the endless construction noises, Indonesia is not a quiet nation. And Lewoban was no exception. The karaoke finished around the time of the pre-dawn call-to-prayer after which the fishing boats headed out, passing very close to Popeye out of curiosity. As a consequence, we saw some beautiful sunrises and sunsets!

One of the motivations for stopping in Lewoban was to hike up one of the smoking volcanoes. Unfortunately, the ‘Tourist Office’ was closed for business and we could not find anyone who seemed prepared to act as a guide. However, seeing the belching steam and yellow sulphur on the volcano as we left, we were not sorry we didn’t get to hike.

As well as taking us ashore for supplies, our yellow dinghy was a method of exploring around our anchorages.

At low tide, the Awalolong Reef exposed its beautiful white sands and a myriad of boats headed out. Our Western biased led us to assume they were tourists enjoying the opportunity to photograph the volcanoes from a white sandy beach. Great idea we decided and headed out! Instead of tourists frolicking around taking selfies, we discovered families digging for shellfish in the sand. A food source with greater guarantee of success than fishing.


One evening as we were wandering along the main drag, several Year 11 school girls approached us. They were studying for a big English test and asked for our help. We had a fun time helping them with their language exercises and somehow, we found they had invited themselves to visit the boat after their test the next day. Two of the girls, a sister and a small cousin, along with a big bag of fresh vegetables, duly arrived. We actually had a fabulous time. Sean pulled out his guitar and the ‘egg’ maracas and sang some foot-stomping Johnny Cash and John Denver. The sister knew the words much to the amazement of the younger girls.  Unfortunately, Sean couldn’t accommodate the request for ‘modern’ music, which turned out to be Rod Stewart!

The weather kept us put for longer than we had planned but gave us the opportunity to catch up on boat chores, refuel and relax. We ate at a wonderful warung each day, the freshest of ikan (fish) and cumi cumi (squid) and she prepared us a number of serves of nasi goreng ayam (chicken fried rice) to save us cooking for a few days.


As we sailed away, we got a better look at Ile Ape and the reason why it always appeared to be cloudy/smoke near the summit.  Molten sulphur.  Yikes!

Note from Sean: As my charmed life continues, I got to spend my 52nd birthday on Popeye.  Kate even managed to scrounge up a birthday bun with candles.  Aren't I lucky?